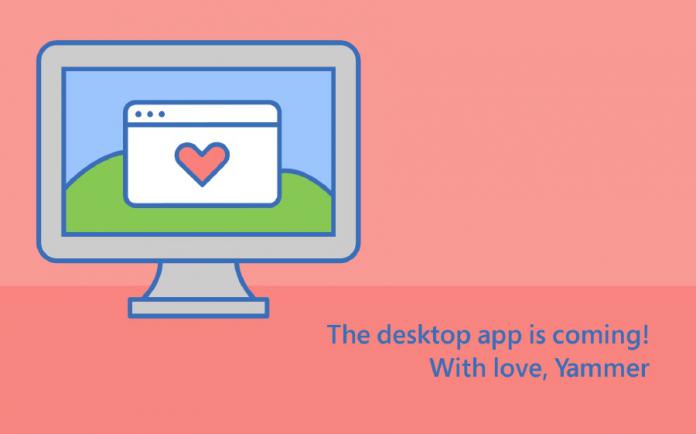 Microsoft has confirmed that its Yammer app is close to being launched. In a blog post, the company says the app will arrive in the next few months on Windows and Mac. The app will be “more full featured” compared to the current Desktop Notifier for Windows.

However, Microsoft has not described what the fully featured app will include. It is clear the company wants to expand the reach of the service in a useable manner across platforms. There are already applications available on Android and iOS platforms.

In the post, the company points out that it has used customers feedback from the Desktop Notifier to create the new full-app experience.

“We’ve gotten tons of great feedback on the current desktop notifier, and we’re excited to deliver a more full-featured desktop app. It will have all the features people know and love about the Yammer browser experience and additional OS notifications to keep you updated on your groups’ activity.”

The current app is only available for Windows and is nothing more than a notification system. It can be installed on a PC to notify users via a system tray icon. When a new social media message is posted on the Yammer portal, the app notifies the user with an alert.

Microsoft bought Yammer for US$1.2 billion in 2012 and since has been expanding the platform. The platform allows customers to stay connected across and organizations. Over the last year, Microsoft integrated Yammer with SharePoint Team site and Document library. That update also brought a OneNote notebook and Planner for task management to the service.

Yammer also received mobile application management through the Intune platform in August. The integration allows users to create policies on apps, such as data flow restrictions.

One of the most important integrations for the platform was the ability to edit and share Office documents. Microsoft announced the capability last year, offering more tools to Yammer users.