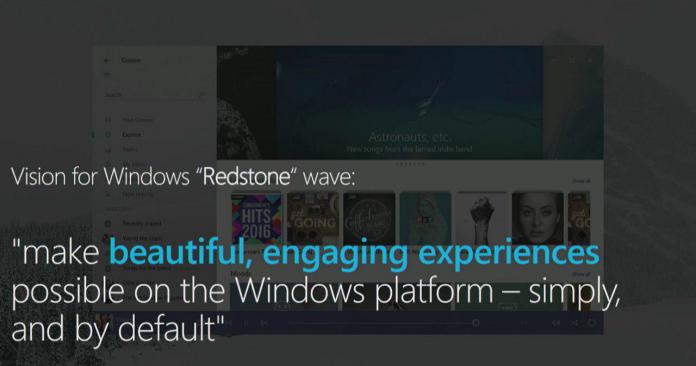 Back in January, we reported on Project Neon, which will be Microsoft’s new design language for Windows 10. The aesthetic overhaul is expected to arrive with Redstone 3 later in the year. At the time, the images were leaked and Microsoft had not confirmed the new design. The company has now officially offered a glimpse of Project Neon.

The slideshow was a part of Microsoft’s livestream for the Windows Developer Day.

While this is confirmation that a redesign of Windows 10 is in the making, Microsoft does not use the name Project Neon. Of course, that does not mean the new look is not called that. Interestingly, the images Microsoft shows are the same as the ones leaked last month. This can be seen with the new Groove Music UI.

Project Neon appears to take cues from previous Windows versions. The Aero Glass design of Windows Vista and Windows 7 are evident in the new UI. As we mentioned last month, Microsoft is making us of more animations and visual blurring.

The company will not remove the professional look of Windows 10, which is an efficient and elegant design. This is evident in the designs Microsoft has shown. The blurred visuals and animations allow for a mix of minimalist while offering information to the user.

Microsoft says its goal for the design language is to “make beautiful, engaging experiences possible on the Windows platform”.

Project Neon will be coming to Windows 10 with the launch of Redstone 3. Microsoft now issues two feature updates for the platform each year. The upcoming Creators Update (Redstone 2) will arrive too soon to include the new design language. Redstone 3 will be coming later in the year and is the build that will change the way Windows 10 looks and feels.