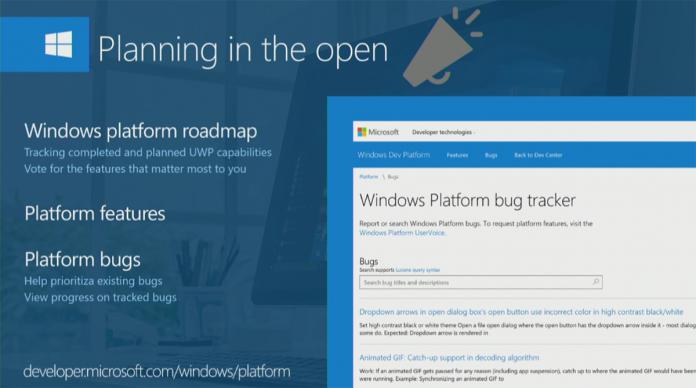 Microsoft’s Windows Developer Day is underway today. One of the announcements at the event was a platform roadmap for Windows 10. The company revealed the roadmap as a way for developers and users to see what Windows features are in development.

The roadmap will give customers a greater overview of the platform. This will include seeing what features are baked into existing and upcoming builds, bugs Microsoft is working on fixing, and more.

Microsoft shared a screenshot of what we presume will be the homepage of the Windows 10 roadmap. As you can see, there are several functions users can perform. For example, they can click platform features to view what the company has planned for Windows 10 in the future.

Also, users can submit bug reports for Windows 10. There is nothing particularly new with this bug tracker as it appears to mimic the Edge bug tracker.

Microsoft says the roadmap is for “tracking completed and planned UWP capabilities. Vote for the features that matter most to you.”

It is worth mentioning that Microsoft already operates a roadmap for Windows. It is unclear if the new service will replace the existing one. However, the current roadmap has only been open since April, 2016 and we find it a useful tool.

Either way, the newly announced platform roadmap for Windows 10 is not yet live. You can check out the page via the source and wait for Microsoft to kick it into action.