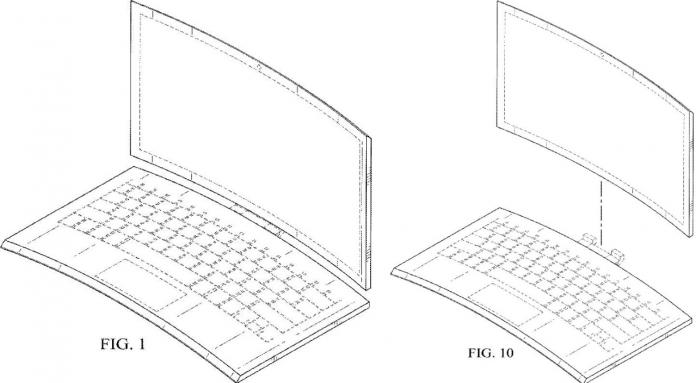 Intel and Microsoft may cooperate from time to time to introduce game-changing technology together. However, both companies also view each other as competitors and this rivalry is apparently about to heat up should Intel go ahead with what seems to be a competitor for Microsoft’s coming Surface Pro 5.

Back in November 2016, the California-based tech giant filed a patent application for an electronic device with detachable curved display. The patent has now apparently been awarded to Intel. The sound of detachable display alone is enough to tell us that Intel is going after the convertibles market that Microsoft’s Surface and Surface Pro lines have brought to shine.

Judging by the patent’s images, this 2-in-1 hybrid laptop would feature a curved detachable display and a similarly curvaceous keyboard that complements the form factor of the screen. Looking at the thickness of the keyboard, it seems like it could have a separate battery in it, and could possibly feature separate storage and more processing hardware.

A curved screen on a laptop won’t be a first since Acer already has that covered with its gaming laptop, Predator 21X. However, Intel could be working on the first hybrid laptop with a curved display.

Intel’s rumored curved hybrid laptop would not be the first rival of the Microsoft Surface Pro 5. Back in December 2016, WinBuzzer interviewed Eve Tech co-founder Konstantinos Karatsevidis and learned about how the company managed to create a two-in-one device with better specs than Microsoft’s Surface Pro 4.

Waiting for the Surface Pro 5

In December 2016, a Chinese report from UDN said that Microsoft might launch the Surface Pro 5 in Q1 2017. This report also suggested that the device will be manufactured by Pegatron Technology and feature a 4K display and a magnetic charging Pen.

So far, the Surface and Surface Pro lines have had quite an impact on the market. Back in September 2016, Microsoft’s Surface Book was named Laptop of the Year, while demand for Microsoft Studio is surprisingly high and the company has ordered the production of 30.000 units for shipment due in Q1 2017.

Finally, Microsoft has been working on the unconfirmed high-end Windows Phone, Surface Phone. The company has not officially used this product name yet, there is a constant flow of rumors and some hints that Microsoft plans to release Surface Phone at some point this year.