Microsoft open-sourced PowerShell Core in summer 2016 to make it available on a broader range of systems.

The company published the PowerShell source-code to GitHub as a first alpha-version, where interested users could download it for implementations with RedHat, Ubuntu, Cent OS and macOS.

Microsoft has also shared three install-scripts for apt-get and yum for that can be used with Ubuntu 14.04, Ubuntu 16.04 and CentOS.

The code has also been updated, bringing the current version to PowerShell Core 6.0 alpha.15. You can head over to the official announcement to get detailed instructions about how to get PowerShell Core 6.0 running on your Linux system. The PowerShell website offers more details about the whole project.

Here is a video from Channel9 that goes through all the details about PowerShell on Linux. 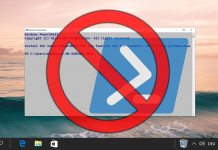 How to Disable PowerShell in Windows 10