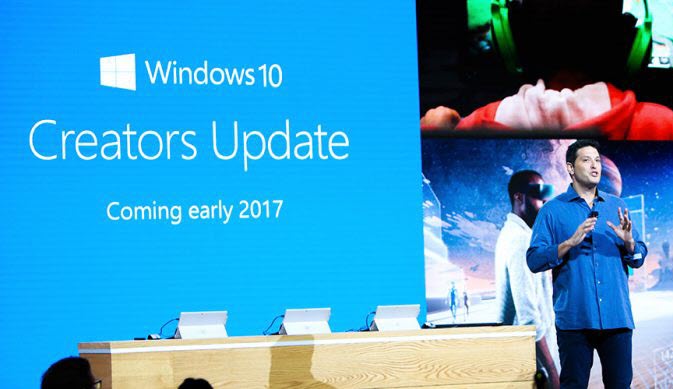 Apart from a longer list of bug-fixes (see here), braille support for Narrator is the main feature addition of this release. The feature, which is still in beta, enables visually impaired users to connect their braille display/table with Windows 10 and use it with the built in Windows 10 Narrator. Microsoft has shared the necessary steps to activate braille support in Windows 10 Narrator in the release announcement: Using the new Windows 10 braille feature together with third party screen readers might cause issues, so it is recommended to deactivate them before turning on braille support for Narrator.

Microsoft promises to offer a more detailed documentation about Windows 10 braille display key mappings in the Narrator User Guide once the Creators Update gets released.

Also aimed at visually impaired users is a new mono audio option in Ease of Access settings, so they might just one earbud so the other ear is free to hear conversations and sounds around them.

Another improvement in Windows 10 Build 15025 are Collections in the Feedback Hub, that according to Microsoft, group “together feedback for similar problems and suggestions into single items that bring together all the voices who expressed that sentiment in one place.” As in the case of individual feedback, Insiders will “be able to upvote Collections, upload screenshots to show the engineering team a problem [they]’re seeing or a suggestion [they] have, and comment on the feedback with others.”

Finally, Microsoft has improved the night light option in the settings app, extending the color temperature range to very red (1200 K) and fixing some issues with the range slider.

You can consult the rest of the fixes and changes for Windows 10 Creators Update Build 15025 on the official blog post, as well as the list of known issues that Microsoft is already working on.