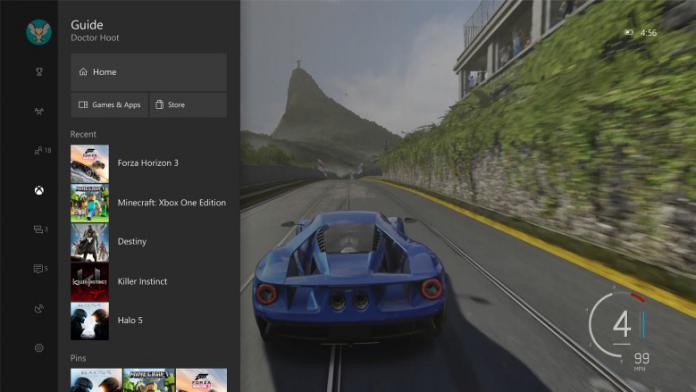 Because Windows 10 is a universal platform, the upcoming Creators Update will be as important for Xbox as it is for PC. Microsoft has today announced the first wave of Creators Update. The additions are rolling out as part of an update for the Xbox Insider Program.

The company has said that the Creators Update will bring hundreds of improvements to the Xbox One and Xbox Live. Some of them will be minor, while some will be significant new features. Today’s update is the start of this process. It gives Insiders a chance to test the build and give Microsoft feedback accordingly.

At the moment, the update is rolling out to a “small subset” of Xbox Insiders. However, in the coming weeks it will land for all Xbox Insider Program members.

As mentioned, Microsoft has made some important changes to the Xbox One. Below we have a look at the most significant changes made today.

New Home experience – With the Windows 10 Creators Update, Xbox One users will have a new UI experience. Microsoft says user feedback has suggested the current UI is too complex and requires too many steps to achieve tasks. With that in mind, the company is introducing a smoother and simpler UI for the Home. The company says it is tailoring what appears on Home to the user. This means information most important to users will be at the forefront. Speed and efficiency are also important, so Microsoft has made the whole UI slicker. The company explains some of the specifics:

“You’ll notice the main tile for what you’re currently playing has changed. Now, you’ll see a smaller icon for the game and a few options to dive deeper into the Game Hub, interact with your Club or LFG for that game, view your Achievements, and more. The updated Home also celebrates the game you’re currently playing with hero art in the background when you’re not using a custom background.” Improved Guide – Expanding beyond the Home page, Microsoft has also turned its UI attention to the Guide. More specifically, users will see a new and improved Guide when they press the Xbox button on their gamepad. This appears as an overlay on the left of the screen and appears whatever the current task being performed. A new start page makes navigating to areas of the UI easier. Media controls for background music are also accessible here.

Multitasking – Microsoft says it has evolved the way Windows 10 multitasks on the Xbox One. The focus of the change is on making it easier to discover and access things that are important. For example, music, GameDVR, and screen shots are available with just one button.

“You can bring up Guide and press “X” or “Y” on your controller to record your favorite gaming moments. We’ve also added a new achievement tracker which allows you to track your favorite achievements and play at the same time. The new Guide is also where you will be able to broadcast instantly to Beam when we roll that out to Insiders in the next couple of weeks.” Cortana – Microsoft will push the next phase of Cortana with the Creators Update, and the Xbox One will be involved. The new Insider update allows the virtual assistant to complete more tasks on the console. Cortana can now set reminders and alarms. Microsoft says more functionality will arrive in the coming weeks. Updates – Windows 10 has brought in an era where Microsoft believes users should not have to worry about updates. This has been hit and miss, but the company wants updates to be automatic and to just work:

“Our goal with system updates is that you never have to worry about them again, and to make it clearer when a system update is available. To enable this we are updating the interface so the steps are easy to understand. We’re also going to enable every Xbox One owner to keep their console, games, and apps up to date independent of which power mode they have chosen.” While the above changes are the most significant, Microsoft also introduced the following with this preview build: