Among the huge number of new features in Windows 10 Build 15014, a curious change has been spotted. Microsoft seems to be experimenting with some new, advanced update options.

Users can now update other Microsoft products with Windows, including drivers and programs. They can also sign in automatically after completing an update, which should save some time and annoyances.

The changes were spotted by u/jcotto42 on Reddit, though some may have been present in earlier builds.

For now, the features are limited to Pro versions of Windows 10.

The menu also comes with extra options for feature and quality updates. Users can choose when the updates are installed, between “Current Branch” and “Current Branch for Business.” Microsoft has also introduced several options to defer updates. This could be a response to the webcam and PowerShell issues that came with the Windows 10 Anniversary Update. It will also remove the need to update during busy periods. You’ll be able to delay both feature and quality updates by a certain number of days.

The numbers are surprisingly high. Feature updates can be delayed by up to a year and quality updates up to a month. This seems like a positive change, though it may result in more outdated systems.

Currently, only a few users seem to have access to the settings. As a result, this feels like more of an experiment on Microsoft’s part than something set in stone. The company is testing a power slider feature similarly. The features availability will likely depend on feedback from users, as well as telemetry data.

With hope, these options will reach a wider audience and different OS versions. Personally, I’d like to see it come to Home so all users can benefit. Let us know your opinion in the comments below. 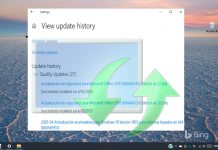 How to Uninstall or Roll Back Any Windows 10 Update