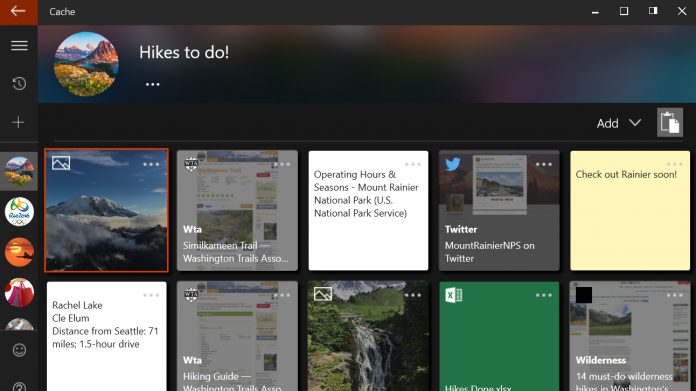 Back in August, Microsoft’s Garage division debuted a new app called Cache. The service allowed users to sync files between their Windows PC and iPhone. Despite being new, Garage has decided it is going to shut down Cache.

The company released an email today informing of the end of Cache. If you use the service, you can continue to do so until February 28, 2017. Below you can see the email that Microsoft Garage has sent out to explain the decision.

“Last year, we set off on a mission to build the simplest way for people to organize their digital stuff around the things important to them, and evolved the OneClip app to Cache. We launched through The Microsoft Garage to bring Cache to you and learn from your feedback. Over the course of this year, we learned that there was an appetite for a service like Cache, but more importantly, your feedback taught us a lot about the extent of the challenges people have with managing and organizing their work.

Moving forward, we won’t develop Cache as a stand-alone product anymore, and we will shut down the Cache service on the 28th of February, 2017. All Garage projects are experiments by definition, and thanks to vocal, passionate users like you, this experiment leaves us better equipped to tackle our original mission to help people easily organize their stuff.

Thanks again for trying an early version of Cache and contributing to the next generation of products that reinvent productivity.”

Microsoft Garage was hugely prolific during the 2016. The division launched a myriad of applications and services across platforms. Garage allows Microsoft employees to collaborate on outside projects and develop ideas without the pressure of creating for a specific Microsoft service. Recently, Garage spoke to us and explained how the division has been a success.

One of the key aspects of Garage is that it lets employees create and fail. All projects are experimental and simply not all of them will work or be successful. We have seen a number of apps become popular, such as News Pro and the Hub Keyboard.