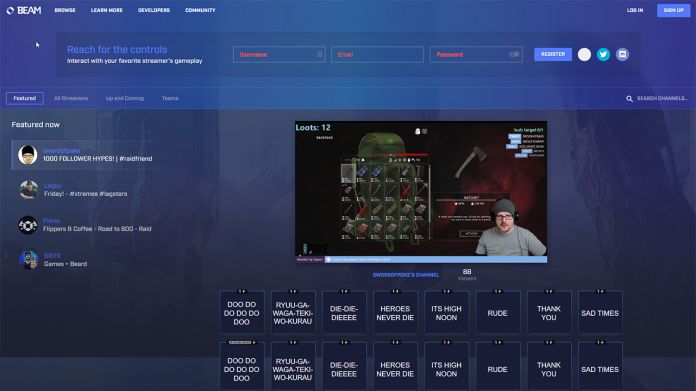 Microsoft seemed to acquire Beam out of nowhere back in August, but it’s clear the company already has big plans for the service. Today, the game streaming platform got a major update, with a redesign, performance improvements, and features.

The unique aspect of Beam is the user’s ability to interact directly with streamers. They can vote for challenges, play soundboards and more. None of that has been touched in this update. Instead, the focus is on design, performance, and integration.

The most noticeable change is in Beam’s UI. The platform benefits from new animations and transitions, consistent styling, and a new design language. Users can see what emotes look like before sending, click and drag usernames, and poll with ease.

The homepage has also been modified. Content is right at the forefront, with more screen real estate and the ability to feature multiple broadcasters and events. Though it’s still a work in progress, there’s a lot to like.

The changes combine with Beam’s new logo, which is cleaner and more modern. This is available to streamers via a new branding kit.

According to Beam lead Matt Salsamendi, the changes have also led to performance increases:

“At the cost of removing my one and only design contribution to the site (that beautifully terrible loading spinner), we’ve significantly improved every element of the site’s performance,” he said.

More specifically, load times have increased by five times, allowing for 60 fps render performance across the site. Performance on the mobile web client is also better, and Salsamendi says further improvements are coming.

Beam 2.0 has also increased the support for bitrate and resolution. The max bitrate is now 10 Mbps, and games can now stream at 1440p 60fps. This should also help in scenes with lots of motion, which “now look awesome.”

This is accented by the new, HTML5 player. It has better browser support and features like time scrubbing, timestamp links, and chat replay.

Finally, a little Microsoft touch. The company’s integration has been lacking so far, but that’s about to change. You can now log in to Beam via your Xbox Live account. It’s optional for now but will be mandatory in the future.

Thankfully, it does come with a few advantages. Salsamendi goes into detail in his blog post:

Existing users will be able to convert to XBL any time, and will soon have a unique Gamertag and verification system.

Beam has come a long way since the Microsoft acquisition, and it’s great to see improvements across the board. You can see all the changes for yourself on the Beam website.