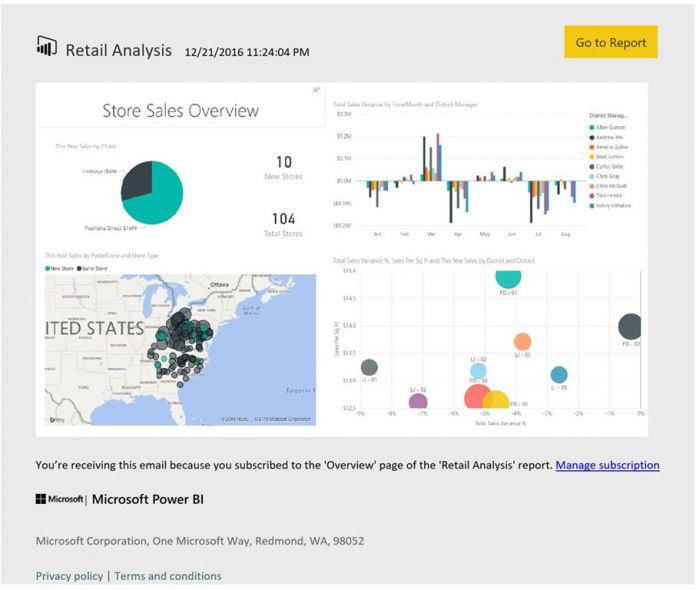 Microsoft has expanded the amount of custom visual APIs for Power BI developers. The company announced a roll out of custom visual developer tool version 1.4. This release comes after what Microsoft admits is a layoff of a few months since new APIs were launched. New email subscriptions for report pages have also been introduced today.

The company says it strives to bring more APIs for developer tools and custom visuals to customers. Version 1.4 brings several new APIs and introduced localization support for the first time. This means users can now create visuals that are aware of location. Because of this feature, visuals can localize content.

To get the locale, it is passed as a string when the visual is started. When a locale is changed in Power BI, the visual will automatically regenerate with the new locale. Microsoft has created 28 locales in total, including Chinese, English, Japanese, Spanish, and Portuguese.

Also on Tuesday, Microsoft introduced email subscriptions to Power BI. The feature brings email subs to report pages. This gives the ability to easily and rapidly subscribe to emails of any report page.

A subscription means Power BI will send screenshots to an inbox to show the report page. These images will be sent regularly, Microsoft says.

“The image in your inbox will show up exactly as it does in Power BI, and include a link to the report where you can drill into any interesting findings. Thanks to email subscriptions, it’s never been so easy to stay up-to-date about the data that matter most.”