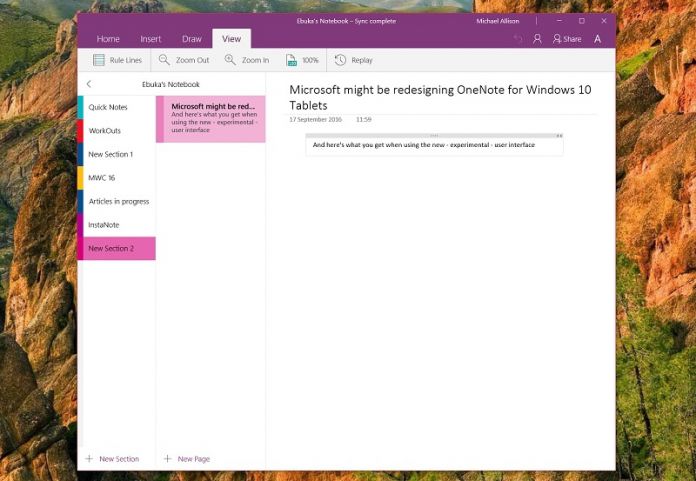 Microsoft is preparing to release its new-look OneNote application on Windows 10 to the public. Willian Devereux, OneNote Product Manager Leader, made the announcement on twitter. The company already pushed the update through to Windows Insiders on the Fast Ring.

This update is for the Universal Windows Platform (UWP) OneNote app. Windows 10 has two versions of OneNote, the UWP application and the older desktop variant. Microsoft now thinks it is time to bring the features from the desktop app to the modern looking Universal app.

We first heard about Microsoft’s plans for a new OneNote UWP experience during a Reddit AMA in September. The company pointed out that OneNote desktop has been developed over the last 13 years. Microsoft wants to have a single UI and interface across platforms. Part of this will include bringing the Android OneNote app up to speed with the iOS and Windows versions.

We've got a ton of great features headed your way in the next update for OneNote on Windows 10!

Microsoft describes this new experience as:

“[Microsoft] is working on a ton of great features, including a brand-new UI which is more accessible and consistent across platforms. We think you’ll really like it, and you’ll be able to try it for yourself very soon! We also just released the ability to share a single page (instead of an entire notebook) via our app on Windows 10.”

William Devereux revealed on twitter that Microsoft has a “ton” of features coming to the app soon. If the Fast Ring release sent out to the Windows Insider Program yesterday is the full update, the release comes with the following features:

While these are not officially announced features, Microsoft is using feedback to create an app users want. Devereux points out that these features are among the most requested from users.