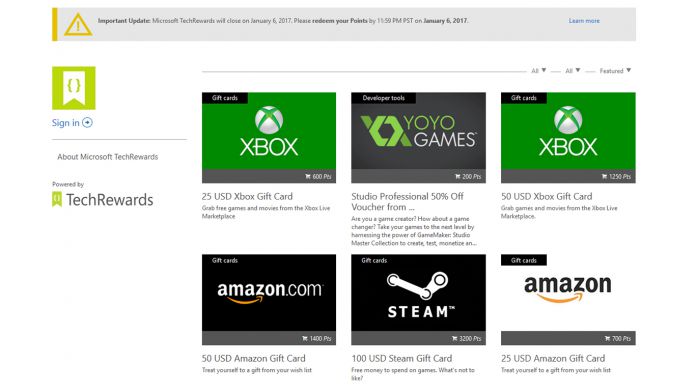 When Microsoft announced the shutdown of its TechRewards program in October, it was a slight surprise. The company’s reasoning was somewhat shaky, saying other services would be better for users.

A list of other services was given to users, but none of them had the same incentives. TechRewards gave developers badges, XP, gift cards and other prizes for putting certain features in their apps. The points could be spent on Xbox and Steam gift cards, Amazon vouchers, Skype Credit, and more.

However, the program had been under criticism for some time for encouraging low-quality apps over polished ones. It’s possible that Microsoft felt it just wasn’t working and adoption was good enough without it.

TechRewards has a long history, starting with Nokia as DVLUP Rewards in 2013, and transitioning to Microsoft after the acquisition.

After more than three years, today marks an official end to the service. Participants received the following message via email:

“We believe other Microsoft Programs, listed below, more closely associated with products and services can best support users in their technical journey.

Microsoft removed the challenges from the site on October 6 and gave developers a chance to redeem any unspent points. Anybody who hasn’t done so has until 11:59 PM PST to change that.