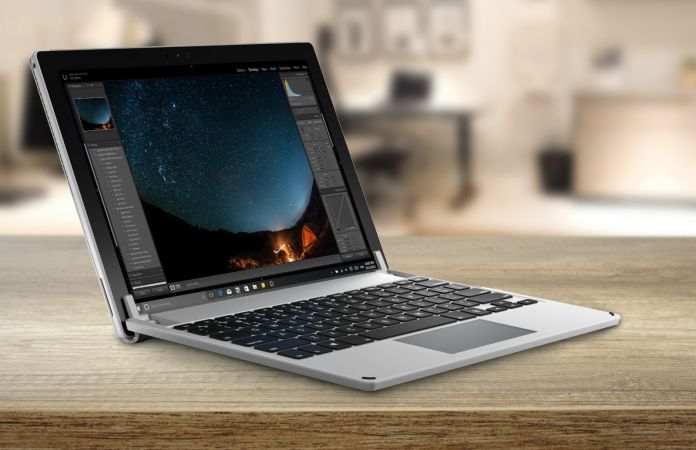 Brydge has been making its hard keyboards for Apple’s iPad for some time. Now the company is expanding its product line for Microsoft Surface devices. The announcement of the Brydge 12.3 was made at CES 2017, which is currently happening in Las Vegas.

The key aspect of Brydge keyboards is that they bring a true keyboard feel and aesthetic. For Microsoft Surface, this means removing the reliance on the kick stand. The image below shows the original Surface keyboard (left) next to the Brydge 12.3 (right).

Because it aims for a full laptop appearance, Brydge has made its 12.3 keyboard a 100 percent aluminum body. The deck is also backlit, which is an essential feature for a topline keyboard. By connecting this keyboard, the Surface Pro 4 becomes a true alternative to Microsoft’s Surface Book.

As mentioned, the design of the Brydge 12.3 eliminates the need for a kickstand. This is achieved by a 180-degree screen rotation from a hinge. Brydge explains that the screen provides the strength to prop up the Surface.

“Surface users have been waiting for a powerful keyboard like the Brydge 12.3. Since its release in 2012, the Surface has been the fastest-growing tablet—and this growth is only accelerating. It is a powerful and versatile device that deserves a keyboard that unlocks its true potential,” said Nicholas Smith, CEO of Brydge.

The Brydge 12.3 was launched at CES 2017 and is an Innovation Awards Honoree at the event. If you are visiting the trade show this week, you can see the keyboard at booth #7933 in the North Hall.

As for price, the keyboard will cost $149.99 and is available for pre-order from January 5. Early preorders will be able to get the device for $129.99 and it will be shipping this spring. In the coming months, retail partners will be announced for the Brydge 12.3.