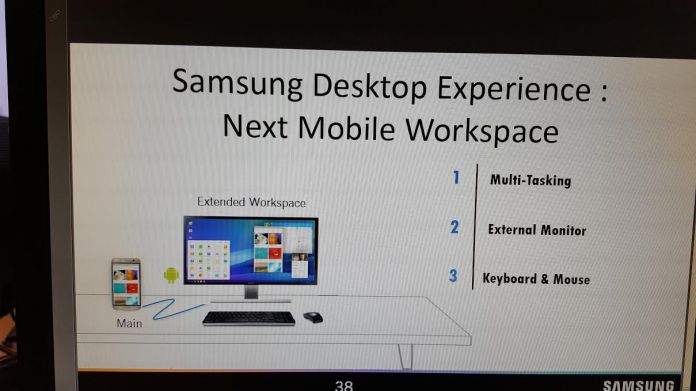 Samsung will be launching its Galaxy S8 in a few months. The company’s latest flagship will be a barnstorming device as usual, but the hunt for new features is always a challenge. To give its new handset a tech edge over rivals, Samsung could be turning to one of Microsoft’s Continuum feature

It seems Samsung has taken notice of the power of Continuum and will try to create a similar feature for the Galaxy S8. All About Windows Phone has found an image that shows the Galaxy S8 with a Continuum-like feature. This would allow users to plug in the smartphone and use it for a desktop-like experience.

It is hardly a surprise that other companies will turn to this type of technology. Productivity and appealing to enterprise customers is one of the next horizons for manufacturers. Of course, Samsung has probably not directly stolen this feature from Microsoft, but Continuum certainly served as inspiration.

One of the good things about Continuum is that it gives users a near full Windows 10 experience on the move. Of course, Android has some limitations in this aspect as it is not a desktop OS. In other words, it is not as suited to a big screen experience and does not allow full programs.

Samsung will attempt to overcome these limitations with a multi-tasking capability. The company will also make it possible to connect peripherals like a mouse and keyboard. Interestingly, it seems that users can still use the phone whilst it is connected to the screen.

The Galaxy S8 will be launched this February or March and may make an appearance at MWC next month.