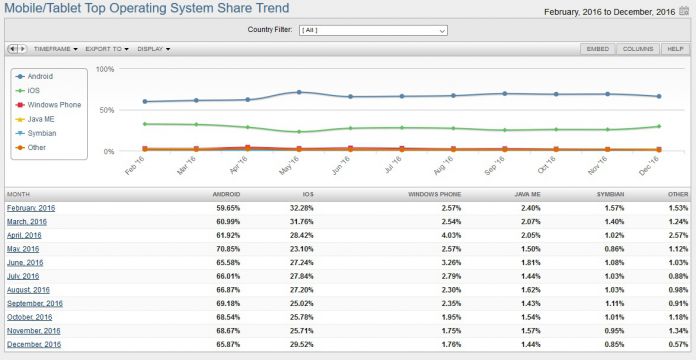 With 2016 now in memory, NetMarketShare has looked back on December’s figures for Windows Phone. As we became used to throughout last year, Windows Phone has been struggling for growth. This is especially true for Windows 10 Mobile, which has tanked at periods. Throughout December, Microsoft’s mobile platform stayed stagnant.

During the final month of last year, Windows Phone market shared was at 1.76%. This represents minor growth of 0.01% compared to 1.75% in November. This means the market for Windows-based mobile devices remained mostly stagnant. It is worth noting the results incorporate the busy holiday season where a platform may see more adoption due to increased hardware sales.

While Windows Phone grew slightly overall, the fate of Windows 10 Mobile remains hugely concerning to Microsoft. Over one of the busiest months of the year, the platform actually declined to 0.39%. Again, there is only a 0.01% difference from 0.40% in November.

Microsoft will be worried that it newest full Windows Phone build is sinking without a trace. Indeed, back in June 2016, Windows 10 Mobile took 1.13% of the mobile OS market. It has declined dramatically since then and Microsoft is still scrambling around for a strategy to make it work.

Considering the latest data, it is hard to see how the company can stimulate and upward market swing in 2017. The task is harder with OEMs generally not supporting Windows 10 Mobile with compelling hardware. Microsoft could return with a Surface Phone at some point, but there is increasingly feeling that it’s too little too late for Windows 10 Mobile.

It was a rocky year for Windows 10 Mobile. Microsoft started the year seeking to chip into the market dominance of Android and iOS. However, the early optimism did not last long as the platform failed to connect with customers. Even the flagship Lumia 950 and Lumia 950 XL smartphones did little to spur market growth.

Instead of 2016 being a year of Windows 10 Mobile establishing itself, it actually became the year Microsoft took a drastic decision. The company announced in the spring of 2016 that it was stopping making Lumia handsets. While the company could return to hardware in the future, for now the Nokia acquisition ended in disaster.

However, Redmond promised to maintain support for Windows 10 Mobile, while insisting the platform remains very important for its plans.