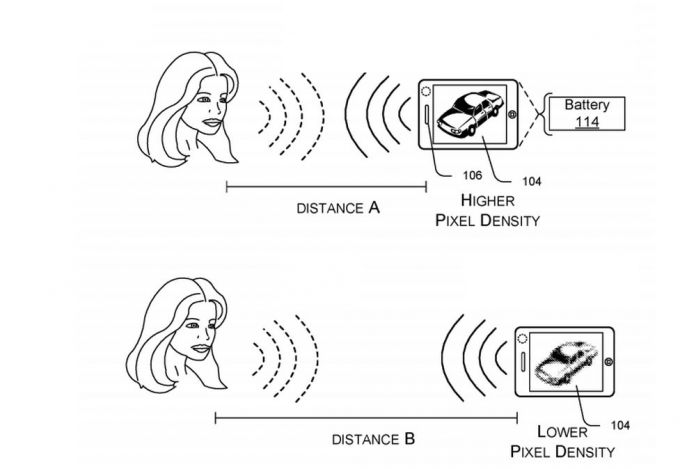 Most of today’s mobile devices come with high-resolution displays to show content at high quality. A big part of system resources are required for processing the visual output, wich leads to high power consumption. Limited battery life of smartphones and tablets is one of the most annoying factors, even for the most expensive devices.

Microsoft has been experimenting with different ways to solve this problem. A new patent filing from last week is now presenting a completely different approach.

The basic idea behind the concept is to only provide the level of image resolution to the user which can be perceived, depending on the distance between eyes and display.

With DRS the amount of system resources required for processing and rendering visual content can be reduced, resulting in lower battery usage and longer runtime.

“This application describes dynamic resolution scaling (DRS) techniques to reduce the amount of system resources required to process and render graphical content. In the case of battery powered devices, this may in turn result in less power consumption by the system resources to perform the graphics processing operations. Humans have upper limits at which they can visually-perceive display density of pixels.

For example, users that are considered to have normal vision (e.g., 20/20 vision) are able to separate contours that are approximately 1.75 mm apart on a display when standing 20 feet away. Human visual acuity generally increases as a human is closer to the object they are viewing, and decreases as the human is further from the object they are viewing. The techniques described in this application dynamically adjust display resolution to reduce system resources to process and render content without sacrificing user experience.”

The patent depicts a device that “may dynamically adjust a pixel density based at least in part on a viewing distance between a user and a display of the computing device.” An array of acoustic sensors would determine the viewing distance while the display resolution would be modified locally before the content is processed.

The patent also states that “scaling down the pixel density of the content may require less system resources to process the content”, which in turn would directly result with “less power consumption by the processors to perform the graphics processing operations.”

Obviously, there is an ever-present demand for a better battery life, especially for mobile devices. The practical use of such techniques could have an instant impact on the mobile market and beyond.

One important factor is that the techniques described in the patent filing do not affect user experience in any way. Considering that high-resolution displays usually go well above the limits of human eyesight, having a dynamic resolution scaling display would be most beneficial to mobile users.