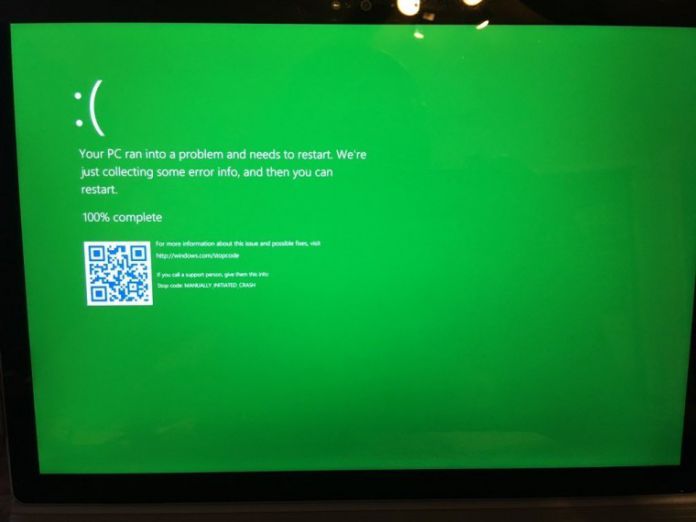 The famed and feared ‘Blue Screen of Death’ (BSOD) is the way Windows tells you something is wrong. Of course, it is also coupled with a PC crash, another hint something’s up. However, some users may be saying goodbye to the BSOD soon. Unfortunately, Microsoft has not found a way to prevent system or hardware crashes, but the company is overhauling the crash screen with a hint of green.

While BSOD problems once made many people think the PC was completely tanked, now more people know that they are common. A BSOD issue is not always fatal. They are still hugely frustrating though, as I can attest after a recent plague of “KERNEL_DATA_INPAGE_ERROR” BSOD’s.

As we reported this week, Windows 10 Creators Update preview 14997 leaked online. The build has already proved to be a bounty of information. We have already covered features like a Game Mode for Windows 10, the ability to pause updates, and other additions.

Cool to read all the new features people discover in the leaked builds, but they missed a big change!, Huge change!. curious when its found.

Taking to twitter, he hinted at the change before coming back a day later with another hint. That was enough for enthusiast @Chris123NT to dig around and find the image you see above.

Yes, the Blue Screen of Death (BSOD) has now become the Green Screen of Death (GSOD). There is one final twist in this tale. Microsoft is not changing the BSOD for Windows 10 users, but Windows Insiders will get the new GSOD screen.

The only question is why Microsoft is doing this? The company wanted a different screen to show production build crashes compared to Insider preview builds.