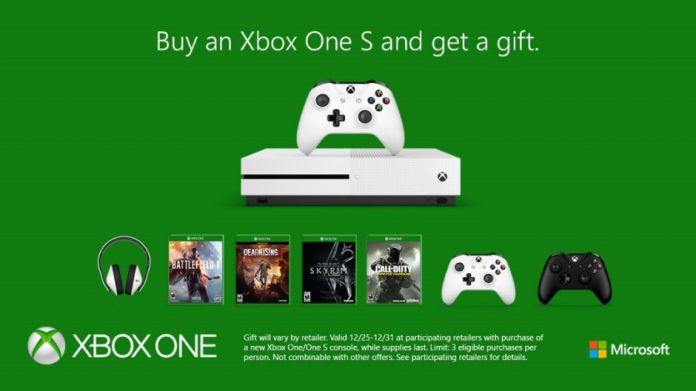 Christmas may be over, but Microsoft isn’t finished on the holiday deals. From December 25th to 31st, purchase of the Xbox One comes with a “free gift.” The item varies depending on the store, but each has a pretty good offer.

As well as games and accessories, most retailers are giving away a $50 gift card. Users can use it to buy further games or accessories, making this a pretty good deal.

Naturally, Microsoft hasn’t been able to get every retailer on board. However, most of the major US ones are there. Here’s what each is offering:

Despite this list, the only deal I’m seeing on the Target is a free controller. However, Microsoft is definitely running the deal, and you can choose between the following:

There are some worthwhile games here, and the offer covers almost every genre. It’s currently available with the Battlefield One, Minecraft and Gears of 4 bundles, and you’ll also get a free copy of The Crew thrown in.

With the holiday season coming to a close, this might be the best offer we see for a while. However, it’s fairly clear what Microsoft’s tactic is.

Project Scorpio is due for release in 2017, and reports indicate that it will be better than the One S in every way. Though it will be more expensive, this is a good opportunity for Microsoft to dump its stock before release, as well as the extra they’ve accumulated over Christmas.

However, for the average user, this is probably one of the best times to pick up the console. More and more UWP apps are coming to the platform, and Microsoft is continually improving its OS.

You can pick up an Xbox One, The Crew, a free game and a $50 gift code from the Microsoft Store.