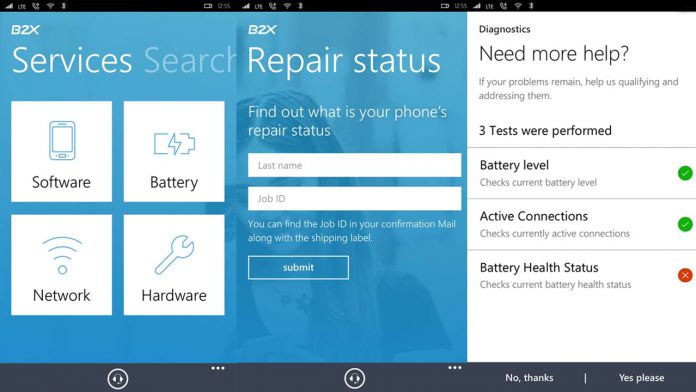 In October, Microsoft announced that it would be discontinuing support for all Lumia devices. Naturally, some users were concerned, but the company has simply handed the reigns over to B2X, a third-party.

We noted then B2X’s bad rep, especially on Facebook. Thankfully, it looks like the company is taking steps to remedy that. The German company has released a Windows mobile app with troubleshooting tips and contact info.

The app is on both Windows 8.1 and Windows 10, so those on older models won’t miss out. The ability to check all of your support needs in one place will make things a little easier.

Unfortunately, the overall service doesn’t seem to have improved much since October. Users are still reporting wait times of two months or longer, and in some cases lost or broken phones.

Some Lumia customers are feeling shafted by Microsoft’s decision. Many have decided to pay for repairs than risk the long wait times. With hope, this will take some of the weight from B2X support and mark a more positive support experience going forward.

You can download the app now from the Windows Store.