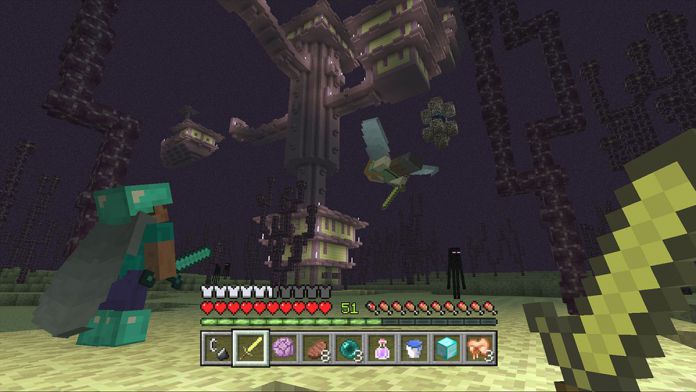 Minecraft console players are in for a holiday treat as Mojang releases a major update that includes lots of new features and improvements. The company previously updated the PC/Mac and Pocket/Windows 10 versions of the game.

Minecraft: Console Edition Holiday Update brings the game version to 1.10. It features a wide array of new things to try out, including new mobs, blocks, items and status effects. The End is significantly revamped, while there are certain changes in crafting and brewing.

Here all the changes from the official changelog:

In addition, Mojang also released a slew of new mash-up packs, maps, and different skins for the console edition of the popular game.

The Merry bundle, available on Xbox and Playstation Editions for $6.99, includes the Festive Mash-up Pack, Skin Pack, and Battle Map. The Festive Battle Map is also available separately for $1.99.

If you are not feeling the holiday spirit, you have the Fallout Mash-up pack, available for $5.99 on all consoles. Furthermore, the Dr. Who skin packs are available for Xbox and Wii U users, previously only available for the PlayStation edition.

To top it all off, Mojang is also giving away a free Skin pack featuring the company’s original developers. Happy playing!