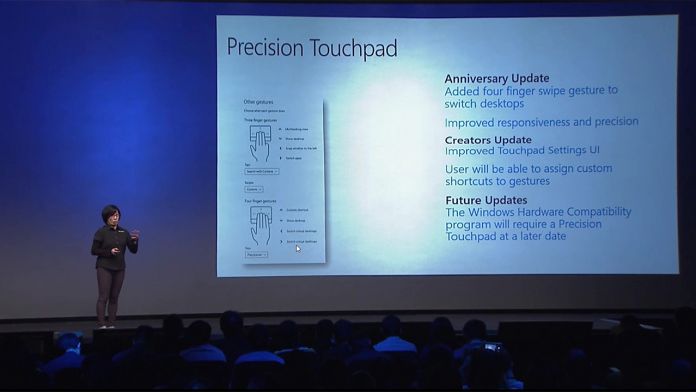 Since the inception of Windows laptops, making a good touchpad has been a struggle. Historically, hardware manufacturers had to tweak tech and drivers separately to try to get an optimal experience.

However, Microsoft stepped with Windows 8 and introduced Precision Touchpad. The technology changes how Windows treats touchpads, treating them as their own thing rather than a USB mouse.

In Windows 10, Microsoft built on that, and even more so with the Creators Update. The OS now has a number of gestures and algorithms baked right into the OS for a pleasant experience.

However, to take advantage of Precision Touchpad, OEMs need to have the relevant hardware underneath. A lot of manufacturers have skimped on this, despite the fact that it’s usually superior.

As a result, Microsoft’s Windows Hardware Compatibility program will now require future devices to have a Precision Touchpad. This news comes out of the WinHEC conference in Shenzen, China, where Senior Program Manager Joyce Ho gave a keynote.

The implementation of this policy would mean OEMs have no choice but to use Precision Touchpads if they want a “Built for Windows 10” certification. It would cut out third-party trackpad creators like ElanTech but result in a better experience overall.

Naturally, existing users of ElanTech or Synaptics touchpads don’t have to worry. Nothing will change for devices that have already been created. In fact, the modification will only come into place after the release of the Windows 10 Creators Update in early 2017.

For the full WinHEC talk on the Interaction Platform and Precision Touchpad, you can watch the full keynote here.