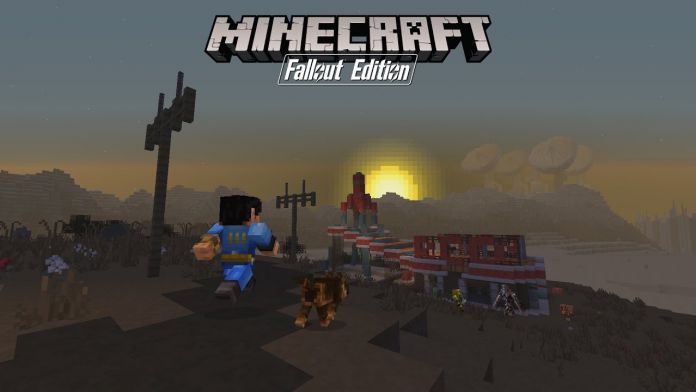 Modders have been trying to bring Fallout to Minecraft since the java version, laboring over texture packs, skins and more. All of these have been limited in scope, and none have managed to reach the Xbox platform.

Thankfully, that’s about to change, and all for the low price of $5.99. The Fallout Mash-Up pack contains 44 skins, as well as a modified UI and iconic Fallout locations.

Players can expect to visit Vault 111, Diamond City, Tenpenny tower, the capital building, and more. The world will even be inhabited by Fallout’s creatures, with Brahmin, ghouls, and giant spiders all making an appearance.

Naturally, this will all be overlaid with a brand new wasteland inspired texture pack, which brings a dingy, irradiated feel to the game. We don’t have a full list of characters, but so far we’ve seen the following player skins:

It also looks like Dogmeat will make an appearance via re-textured wolves, and will follow you around wherever you go. Furthermore, Mojang has managed to port the Fallout soundtrack into the game, which will combine “familiar tunes from across the Fallout series.”

Of course, the underlying mechanics of Minecraft aren’t going to change. You won’t be able to V.A.T.S, level up, or collect guns. However, for $5.99 this DLC is hard to argue with. It’s bound to bring some new life into the game, especially for Bethesda fans.

The Fallout Mash-up Pack will be launching on Console in “the coming days.” It extends to Xbox One, PlayStation 4, Wii U, Xbox 360, Playstation 3, and PS Vita.

You can find out more on the Minecraft blog.