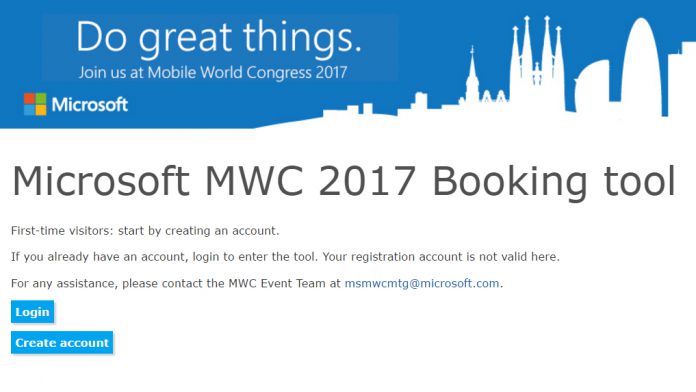 All official statements from Microsoft suggest that the company is staying away from the Mobile market for at least a few years. However, this hasn’t stopped its commitment to Windows 10, or other OEMs.

Presumably, that’s why Microsoft is still attending MWC in Barcelona this year. A website discovered by WalkingCat on Twitter allows partners to set up a meeting with the Redmond giant at the event.

The website contains the Windows 10 tagline “do great things,” which gives a good indication of what the focus will be. No doubt Microsoft will be showing off some of the features of the Creators Update, as well as their Surface line.

Despite this, it seems very unlikely that the Surface Phone will make an appearance. Recent rumors suggest a release in fall of next year, and the Pegatron is reportedly just beginning trial production.

Of course, Microsoft could announce the phone for a later release, but that doesn’t feel like their style. It’s also possible we’ll get a glance at Windows 10 Mobile’s ARM functionality, a feature that’s expected to launch around the same period.

Whatever the case, Microsoft will probably have a reduced presence this year, focusing on meetings with partners. Adding to the Elite x3, HP is apparently planning another Windows Phone, so a WMC launch alongside them could happen.

Now that the cats out of the bag, it would be nice to hear some plans from the Redmond giant. The only thing we can say for certain so is that Microsoft will be attending, and will be located in Hall 3, Stand 3B40.

Microsoft is listed as an exhibitor, but we’ll have to wait and see if anything new will be shown. You can subscribe to our newsletter to be notified of that when it happens.