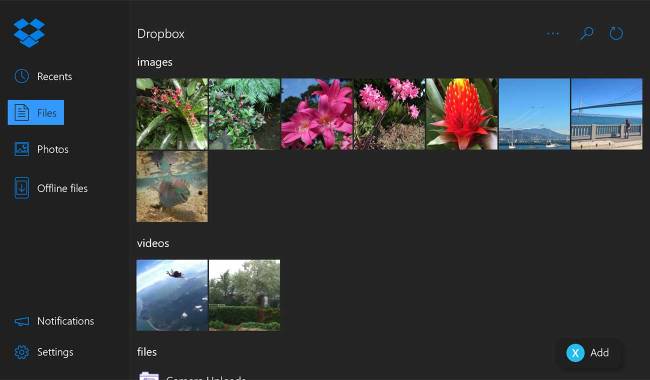 Dropbox is the latest big-name developer to embrace Microsoft’s Universal Windows Platform (UWP). The cloud storage company has debuted an app that truly uses the UWP ethos. That means it is available on all Windows 10 devices, including the Xbox One console.

This is quite an important development as it makes Dropbox the first cloud storage provider on the console. Of course, that’s not including Microsoft’s own OneDrive service.

What the app allows users to do is also important. Dropbox on the Xbox One delivers many of the core features you’d expect on the desktop or mobile app. Naturally, this includes the ability to share and view files stored in the cloud. This is not reserved to documents, with media like images and videos also viewable directly from the app.

However, Xbox One users can also tap into cloud stored files from other apps. For example, the VLC media player (also UWP) can access media to view in the app, directly from Dropbox. Needless to say, it brings an added media dimension to Microsoft’s console, especially for users with large libraries in the cloud.

Managing files also comes with most the features you would find on the standard app. This includes the ability to share files, comment on them, or upload new content. Files opened in other Universal Windows Platform apps can also be saved to Dropbox.

Of course, the Xbox One is used with a TV, which means a big layout. The normal UI for the app has been updated and changed to support this larger screen size. As expected navigation can be dealt with via the Xbox One gamepad.

The addition of a Universal app for Windows 10 is something of a coup for Microsoft. Dropbox has avoided launching an app for any TV platform in the past. Perhaps the worry of piracy prevented it. Sure, Roku users will point to their Dropbox app, but that was made in-house by Roku. For example, there is no app for Apple TV or Android TV.