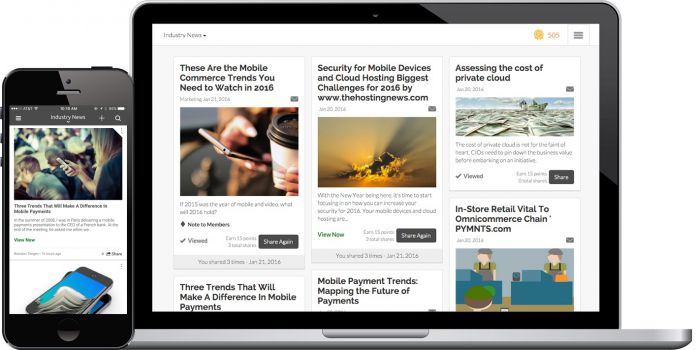 When Facebook updated its Workplace solution last week, we touched on a tech battle for business communication. Companies are pushing out services to help change how organizations communicate, both in-house and outside. Joining the likes of Microsoft Teams and Slack is a startup (Dynamic Signal) that has enjoyed a solid round of funding.

Dynamic Signal is a new enterprise application. It is a platform geared towards large organizations, affording the ability to send communications to employees and partners. These communications are delivered in the form of apps to a recipient’s smartphone. It’s a novel twist on the enterprise-messaging idea.

Through a round of funding, Dynamic Signal gathered $25 million from a B round. This investment puts the total value of the company at $150 million. Among the investors is Microsoft Ventures, the company’s VC division.

There is obviously potential with the new platform. Among the customers already on board are IBM, Procter & Gamble, Capital One, Salesforce, and GE. In total, the company has now raised $68 million. In an interview with TechCrunch, CEP Russ Fradin said the company is looking to scale up with the increased funding.

Microsoft’s links with Dynamic Signal are actually interesting. LinkedIn was actively trying to purchase the company last year, but a price could not be settled. Of course, Microsoft has since acquired LinkedIn in a $26 billion deal.

It is also interesting that Microsoft Ventures would want to help a company like Dynamic Signal. The company is essentially helping fund a growing rival. Microsoft has several enterprise-focused communication services, such as Teams, Skype, and Yammer. However, the differences in Dynamic Signal could appeal to Microsoft, especially for integration to its own services.

Indeed, Microsoft’s investment suggests there could be long-term interest from the company to buy Dynamic Signal. Fradin would not be drawn on that, but the platform does present some new ideas on the organization-based communication idea.

“It’s not meant to be chat,” Fradin said. “There are ways to do replies but not person to person.”

It is worth noting that the service does indeed have a chat feature, but most users disable it, says Fradin. Other features include tracking analysis tools, browser extension creations, APIs, integration with other apps, and emails.

Instead of focusing on chat, Dynamic wants to target in-house corporate websites and publications. This is a new take on organization communication. “If you look at a company like Disney, it has 180,000 employees. The idea that the CEO would be on WhatsApp or something like it is absurd.”

Fradin added, “The average worker does not have email but everyone has smartphone.” The startup is focused on engaging employees through their devices.

The new-look Microsoft Ventures was launched in May. In fact, Ventures is a rebranded Microsoft division that now focuses on small-scale investments. It used to be a startup accelerator, but is now a venture capital wing.

When announced, Microsoft admitted that it has not focused enough on investments in startups. Since Microsoft Ventures was changed, the company has invested in dozens of small businesses.