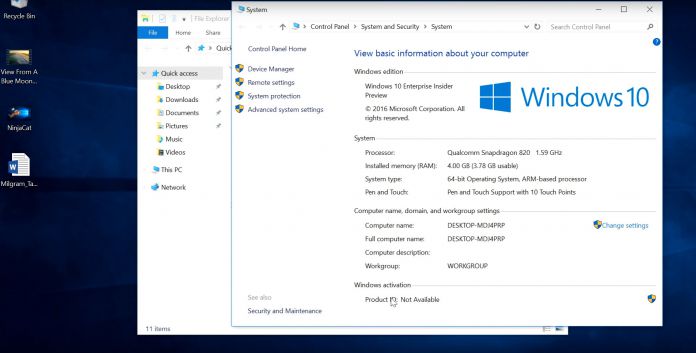 Microsoft seems to be readying Windows 10 Desktop for mobile devices. The company has developed a fully functional ARM version of Windows 10 and shows off the new technology in a demo video.

Microsoft does not give details about the exact hardware used, and if this is a real mobile device or another custom designed testing machine. According to the company, the demo was shot on a 64-bit system running with a Qualcomm Snapdragon 820 CPU with 1,59 GHz and 4 GB of RAM.  As this is in line with the HP Elite x3, the currently leading Windows 10 Mobile flagship, we assume that that is the hardware Microsoft used for its demo.

In a blog post, the company states that the technology is ready to be used by hardware partners.

“Hardware partners will be able to build a range of new Qualcomm Snapdragon-powered Windows 10 PCs that run x86 Win32 and universal Windows apps, including Adobe Photoshop, Microsoft Office and popular Windows games. With Windows 10 on cellular PCs, we will help everyone make the most of the air around them. We look forward to seeing these new devices with integrated cellular connectivity and the great experiences people love like touch, pen and Windows Hello, in market as early as next year.”

Microsoft points out that this is a fully functional build of Windows 10 Enterprise and demonstrates some system features, like system properties, the Task Manager and Microsoft Edge. Touch support in the browser also seems to work just fine.

Looking closer at what is shown in the Task Manager, we can see the system is running at about 11% CPU load and RAM usage of 1,9GB of the 3,8GB available. This still gives a certain margin to run some applications, which Microsoft is happy to demo too.

The company also presents desktop versions of Adobe Photoshop and other apps. They stress that what can be seen in the video are normal x86-bit versions of those apps which are executed on a virtualization subsystem built into Windows 10.

Video playback and gaming is also shown in the video. World of Tanks Blitz is a simple 3D game, which also seems to run smoothly.

The end of the Wintel-paradigm?

This is just a video but it´s also a powerful statement. The company is definitely willing to bring the full desktop experience to ARM hardware.

Some years ago, with Windows RT on the Surface RT, the strategy was somehow different as Microsoft made its first (failed) attempt to enter the arena of cheaper ARM hardware. It ended up with a massive US $900 million write-down in 2013.

As mobile hardware was not as powerful back then and Microsoft offered only a stripped down of Windows 10, which was incapable of running normal x86-Windows applications.

Since then, CPU-technology has progressed and is now powerful enough to run fully functional desktop operating systems, such as Windows 10. It will be interesting to see what impact this will have on Microsoft´s mobile strategy and a possible Surface Phone. Latest rumors are that the company has started the production of test units with their hardware partner Pegatron.