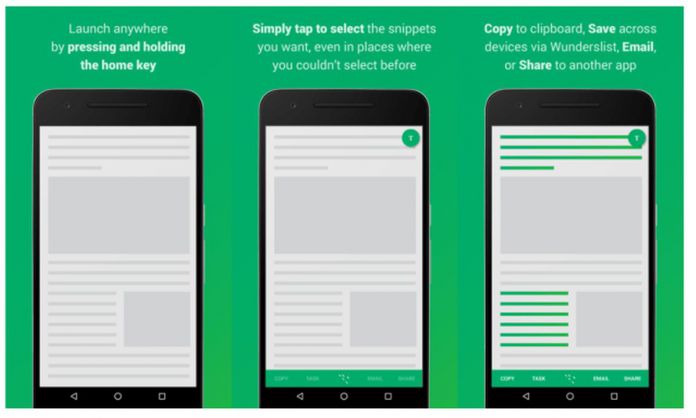 Clip Layer applies a universal overlay over the screen which makes it rather quick and easy to select information. From there, you can copy, share it or email it.

“Like a lot of people, my phone is the center of my life,” says Steve Won, a senior designer with Microsoft’s Office team and creator of Clip Layer. “I like to share what I’ve seen and I noticed a couple of problems unique to consuming on a smartphone.”

The whole process consists of a few simple taps. After launching the app, you can select a snippet and copy it to the clipboard from where you can further act on it. You can also add it to Wunderlist to have it accessible across different devices. In addition, you can also share it to any other app installed on your phone.

Clip Layer is available for download via the Google Play store.

A string of projects

The app is one of the many successful projects coming from the Microsoft Garage. This is an outlet for various Microsoft teams around the world to get their experimental apps and projects out to the public.

These teams get the chance to test a hypothesis, receive early customer feedback, and determine product-market fit. They get expert technical guidance, as well as a lightweight release process to help them get their experiments out quickly.

“I feel like The Garage gives us a lighter weight process to experiment and share a lot of learnings with other teams too,” Won says. “It’s a win-win for project teams and Microsoft.”

Recently, the program celebrated its second birthday as a tool for implementing ideas and bringing them to life. It follows in line with Microsoft’s aim to be a more customer obsessed company by innovating along customer feedback.

Clip Layer is Won’s second app released through The Garage following Hub Keyboard, an app for Android and iOS. Thus, the experience making it helped him prepare better for submitting Clip Layer with the whole process being more familiar.

“It’s always smoother the second time around,” Won says. “This time around, at least I had a better idea of the entire picture. I had peace of mind, knowing what to expect and how to plan for everything.”