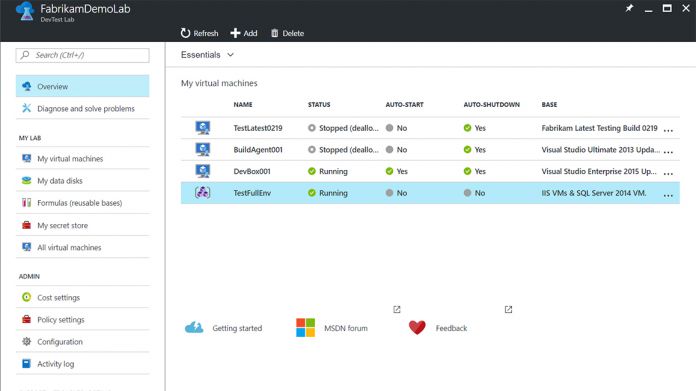 Microsoft’s Azure DevTest Labs gives developers the ability the ability to quickly create sandbox environments while minimizing costs.The application was made generally available in May, and has been updated several times since.

The service has provided a good experience for single VM setups. However, according to senior program manager Xiaoying Guo, the creation of multiple VMs wasn’t very productive. Microsoft’s latest update seeks to address this issue via the integration of Azure Resource Manager templates.

ARM templates should provide a simpler way to create multi-VM environments in DevTest Labs. Users can now take advantage of the following features:

This marks the second cross-compatible feature introduced to the services in a week. Last Thursday, Azure Resource Manager gained the ability to enable automatic shutdown of VMs. This feature was previously available only as a policy in Azure DevTest labs.

ARM users can now pick a specific time for a virtual machine to shut down via the VM blade in the Azure portal. They can also send a notification about this to a webhook URL fifteen minutes before.

For now, DevTest Labs supports limited regions, which means the auto-shutdown feature is also limited. However, Guo says support for other regions is coming soon, and those left out will naturally get access to the ARM template functionality also.

You can find out how to set up an ARM template repo on the DevTest blog. More information about this specific update is also available.