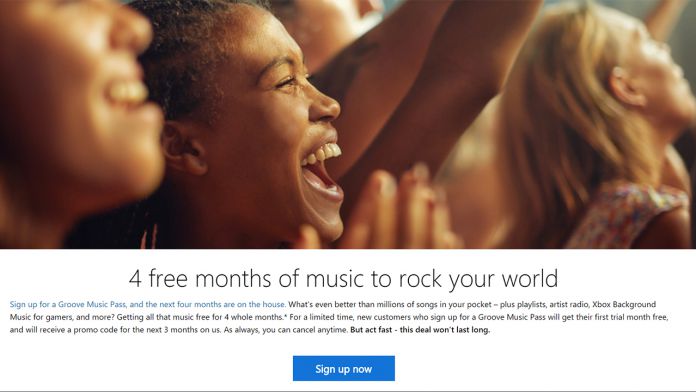 Black Friday and Cyber Monday has brought hundreds of deals to consumers, and your favorite music services are no different. Spotify is offering customers three months of premium for $0.99, Google gave four away for free, and now Microsoft has joined in.

Users that sign up for Microsoft’s 30-day Groove Music Pass trial will get a promo code for an extra three months at no charge. This is probably the best deal we’ve seen to date, the Anniversary Update deal only offering four months if you bought a $9.99 subscription.

For those unfamiliar, the service works similarly to its competitors. Users pay a flat rate each month and can stream Microsoft’s music catalog on an unlimited basis. The library is huge, with over 40 million songs, so you should have no problem finding the artist you like.

It also has the added bonus of Xbox background music support. You can play songs during gameplay, as well as on Windows 10, Xbox, Android, iOS and Windows 10 Mobile. Users can also stream personal music collections from OneDrive, and request songs that are missing.

Of course, Groove Music isn’t all upsides. According to reports, music quality isn’t the greatest in the industry. Both Spotify and Google Play offer a higher bitrate, with the latter winning out. However, it’s still higher than the free tier of Spotify and improves if the music is downloaded.

Thankfully, there’s nothing stopping you trying all three services at once. At $0.99 three months of Spotify premium won’t break the bank, and though Google’s four-month offer seems to be over, you can still try it for a month. This is probably the best chance you’ll get to try them all out.

There’s no word on when Spotify’s offer will end, but stocks are limited. Microsoft’s is more clear cut, running all the way up to December 31. You’ll need a valid card to start the trial, but full access remains even if you cancel immediately. You won’t get the promo code until the end of your first thirty days, so don’t be alarmed if it takes a while to come through.

If all that sounds good, head to this page and pick up your four months free of charge.