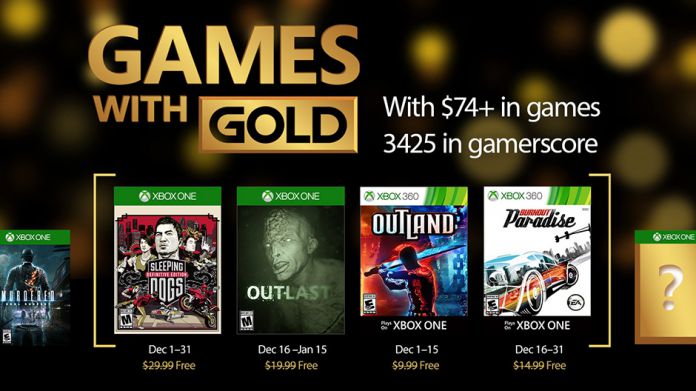 Microsoft has detailed its Xbox One Games for Gold titles for the month of December. There will be four games offered next month, two of them dedicated Xbox One titles. The other two games are Xbox 360 titles that work on the Xbox One through Backward Compatibility.

As always with the Games for Gold promotion, the four games are completely free. For the Xbox One, action game Sleeping Dogs: Definitive Edition and first-person horror Outlast are available.

For the Xbox One and Xbox 360, adventure game Outland and racing classic Burnout Paradise are free. Microsoft points out that the games are available for a limited time only.

Sleeping Dogs: Definitive Edition pushes the drive-and-guns open-world genre with a truly compelling story as an undercover Hong Kong detective. With critically acclaimed combat, a huge variety of vehicles, and countless side quests as all DLC is included, this game provides nonstop thrills in the vibrant and gritty streets of Hong Kong.

In Outlast, play as the investigative journalist, Miles Upshur, who finds himself trapped in a nerve-racking mental asylum whose patients have been twisted by a dark secret. Lacking weapons, Miles can only run or hide to escape the asylum’s terrifying inhabitants, inspiring the chilling fear of a helpless survival horror game.

Bridge the gap between balance and chaos, or doom the world to destruction in Outland, a polarity-shifting 2D platformer. With a gorgeous visual style and unique light-shifting gameplay system, you’ll be wowed by the art while you adapt to a constantly changing world!

Crashing cars has never been as much fun as in Burnout Paradise. Bringing an open-world to the classic eye-watering speed and spectacular crash-heavy racing game, Burnout Paradise lets you earn your Burnout Driver’s license by competing in over 100 events including Races, Stunt Run, Road Rages, and Marked Man.