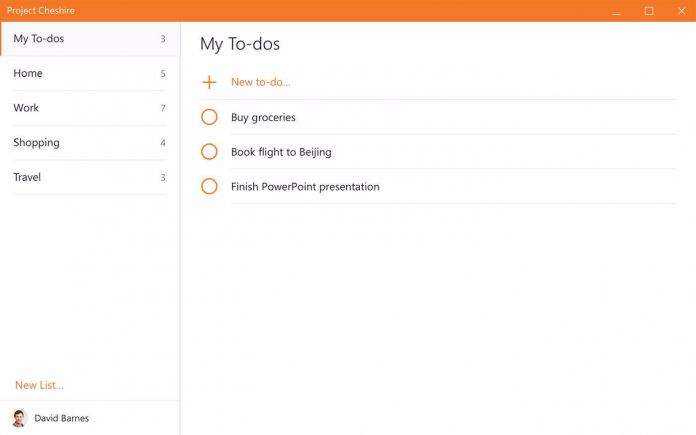 Microsoft’s Project Cheshire is a to-do app that has been floating around behind the scenes for a while. It was first revealed earlier in the year and is now being moved to private beta. Thurrott reports that the app supports the company’s Universal Windows Platform (UWP) for Windows 10.

Project Cheshire will certainly not be the name of the app when it rolls out properly to end users. Either way, it will be a cross-platform application that will run on Android, iOS, and Windows 10.

The app is a to-do list service for devices. It allows users to track their tasks and appoint to-do items to be alerted at a set time.

Back at the end of October, the app appeared in the Windows Store. However, that was a dead app at the time as it led to text saying ‘coming soon’. The app has now been updated, but as this is a private beta it is still a dummy. It leads to a sign-in page, which makes sense as this is a closed preview of the app. Microsoft points this out in the Windows Store:

“Please note that we are still in the early stages of development and are working hard in the background to deliver you the best to-do app ever. Stay tuned for updates and more here.”

As mentioned, the app does not seem to be brimming with interesting features. It is an everyday to-do application and even lacks Microsoft’s usual slick UI design. Of course, it is still in development and could change, but we are confused why Project Cheshire is even a thing.

As Thurrott points out, Microsoft owns Wunderlist after buying the app in June. If you are unfamiliar, Wunderlist is a popular to-do app that presents itself more beautifully and works intuitively. Microsoft bought the app because it had 13 million users.