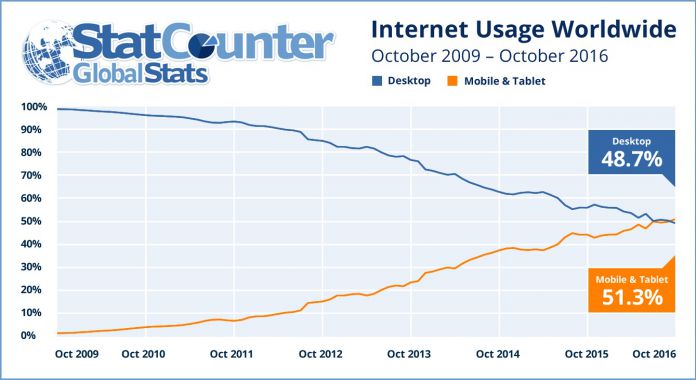 Just a week after Microsoft breathed new life into the desktop PC, new statistics show task ahead for the PC. Internet usage by mobile devices (including tablets) moved past desktop internet usage in October. The information is provided by StatCounter and is the first time mobile internet use has passed desktop use.

StatCounter is an independent web analytics company. Its Global Stats research team says mobile devices accounted for 51.3% of internet usage last month. As for desktop PCs, they were used for 48.7% of internet usage during October.

“This should be a wakeup call especially for small businesses, sole traders and professionals to make sure that their websites are mobile friendly. Many older websites are not,” says Aodhan Cullen, CEO, StatCounter.

While the data is telling, there are some nuances worth exploring. For example, it seems the push towards more mobile use is being driven by emerging markets. StatCounter cites two mature markets where desktop internet usage still outweighs mobile. 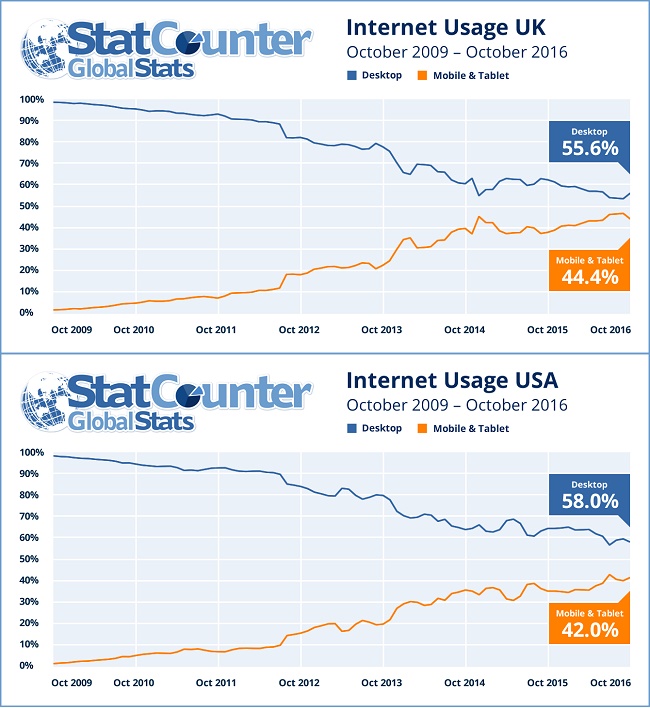 In the United States and United Kingdom, users still prefer to browse the internet from their PC. Indeed, in the US desktop accounts for 58% of internet usage, while mobile takes up 42%. It is a similar story in the UK, where desktops showed 55.6% and mobile 44.4%.

Despite this, it is clear the market it pushing in a single direction. In India, over 75% of internet usage comes from mobiles and tablets. While mature markets are still displaying a tendency towards PCs, the trend is set and mobile will eventually surpass desktop internet usage.

“Mobile compatibility is increasingly important not just because of growing traffic but because Google favours mobile friendly websites for its mobile search results.”

Can the Surface Studio Helps Internet Usage for PCs?

At the top of the article, I said Microsoft had breathed new life into the PC. I was, of course, talking about the Surface Studio, which was announced last week. It is true that the company’s first desktop is an amazing piece of hardware and shows how PCs can be viable even today.

However, there is one key fact to acknowledge. Microsoft is not aiming to redefine the consumer market per se. The Surface Studio is for professionals or at least those who are serious about computing. It is not going to be a device you buy to do some casual surfing of the internet.