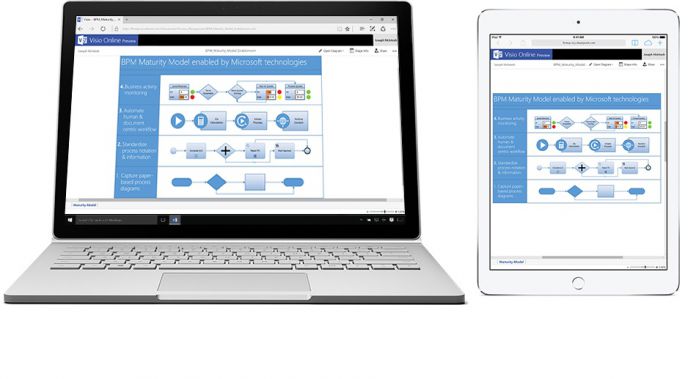 Microsoft has been running its Visio Online diagramming software in closed beta on the web. The company has also promised the service will come to Windows and Android. In the meantime, Visio Online has now been shifted to a public preview for the online version of the service. This follows a similar move to the iPad version a few weeks ago.

The company said it would bring the web version to public preview and has lived up to the promise. This release means users can now view and share their content directly in a browser.

Visio Online is a diagram tool that was first announced in 2015 in its 2016 iteration. The tool has been part of Microsoft’s service line up since 1992 and has been updated regularly since. It allows users to pull data from services like Azure Active Directory, Excel, and others with up-to-date templates. Customers can use the tool to create fast diagrams and visualizations.

On the web, users can view and share diagrams and link to web pages. A zoom function allows more detail in high fidelity and the search brings deeper sub-processes.

With the preview, users can use Visio Pro integrated in Office 365 to edit diagrams.

To use Visio Online on your browser, you will need to be an Office 365 business subscriber, using both SharePoint Online and OneDrive for Business. The following subscriptions give access to Visio:

The Online version of the diagram service functions on Microsoft Edge, Chrome, and Internet Explorer. Microsoft says the full version will roll out to Office 365 commercial subscribers before the close of the year.