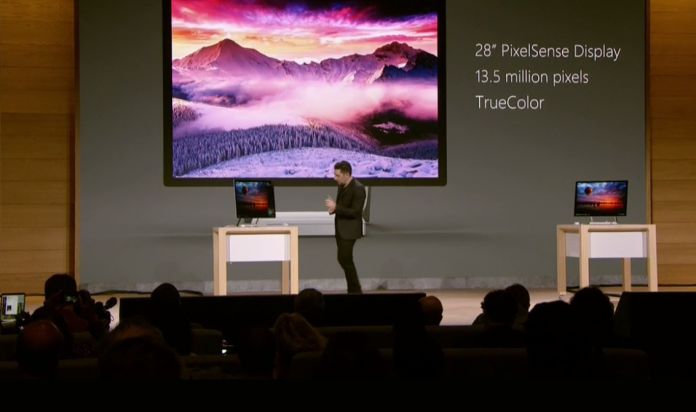 While the official reveal of the Windows 10 Creators Update was pretty huge, Microsoft’s event was about one thing. We suspected the New York event would be about launching a new device. That was widely believed to be the Surface all-in-one PC. That was indeed that case as Microsoft dropped the Surface Studio.

For a company based on supplying software for PCs, it is perhaps surprising that only now has Microsoft built an actual PC. However, thanks to the success of Surface, Microsoft has some serious hardware chops these days. In the computing sector at least.

The Surface Studio is a Windows 10 all-in-one that ticks all the right boxes. For a start, it is as beautiful as any Apple PC, the company often held as an aesthetic benchmark in the computing industry.

As the name suggests, this has been built for creators and professionals. That is not to say consumers will not be interested, especially if top end specs and design are your thing. It has the thinnest LCD ever made at 12.1mm, even with touchscreen. It is a 28-inch panel and has more pixels per inch than a 4K TV.

As we say, the Surface Studio is truly focused on being a creative tour de force. The price certainly reflects its power user-appealing aspiration. If you want to get your hands on this PC, you will have to pay $2,999 for the entry level. This is a lot of PC, but that is also a lot of cost. However, the price point does also fit in to the general market for high end desktops.

Below are some of the key specs:

The Suface Studio also scores some peripheral accessories that will actually be available to all Windows 10 machines. Chief among them is the Surface Dial, which acts as an interaction tool to be placed on the display. Pushing down on the dial brings up a contextual radial menu which allows rotation and scrolling for smoother interaction. The Surface Dial costs $99.99.