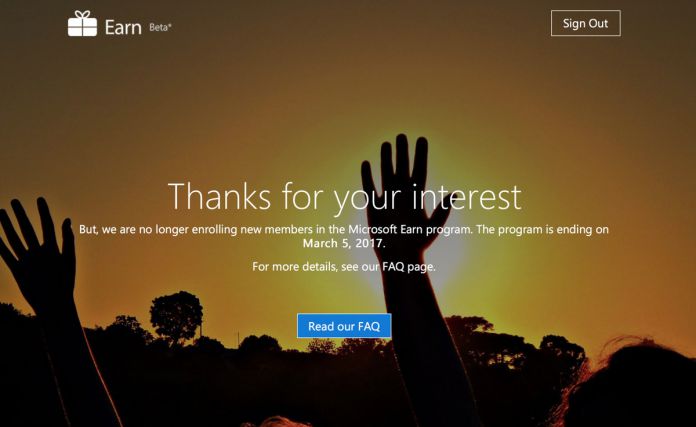 Earn by Microsoft, the company’s program that allows users to earn store credits, will be shut down. An announcement was made by Microsoft today. The company is sending alerts to all  users and giving them more information.

The service has not really been successful. Also, Microsoft has shifted away to other avenues focused on services and cloud. The platform will be closed on March 5, 2017, the company has confirmed. That means users cannot sign up to be a member anymore.

If you are unfamiliar with Earn, it was a program for building up credits to spend in the Microsoft Store. Credits could be gathered by spending in other shopping locations online stores. Microsoft never brought the service further than being a beta offering.

“The Microsoft Earn program is ending on March 5, 2017. We want to thank you for being a member, and we hope the program has been beneficial to you.

Between now and March, you can spend your credits, as usual, in the Microsoft store (online and in-store).”

As well as stopping new member joining, Microsoft says users will stop earning credits on November 15. What do you think of this decision, and more importantly, had you ever heard of Microsoft Earn?