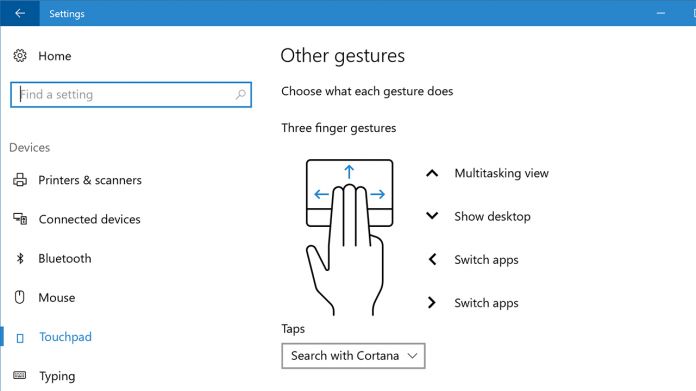 Yesterday, Microsoft released a new Insider build that includes a couple of new features and a number of improvements. The main change is a new touchpad panel in settings that allows for customizable gestures.

Users can now use fingers to search with Cortana, switch apps, and a plenty of other functions. You can switch songs, switch desktops and snap windows without even having to click.

The settings changes are not exclusive to touchpads, with a new drop down in Wi-Fi settings too. You can choose when to turn Wi-Fi back on, between manually, one hour, four hours and a day.

There are also plenty of minor improvements across mobile and desktop:

This update is one of the biggest we’ve seen in Redstone 2 so far. Though most of the improvements are minor, the touch functionality could prove very useful, as will some of the other features.

However, be aware that you might not be able to update if you have Bitdefender, Kapersky, F-Secure or Malwarebytes. You should be able to roll-back to a previous build, though, so there’s no harm done.

Gamers may also want to sit this one out. Large Windows Store games like ReCore, Gears of War 4, Forza Horizon 3 etc. are all crashing on launch. It’s not yet clear how common this is.

You can find more information on the Windows blog.