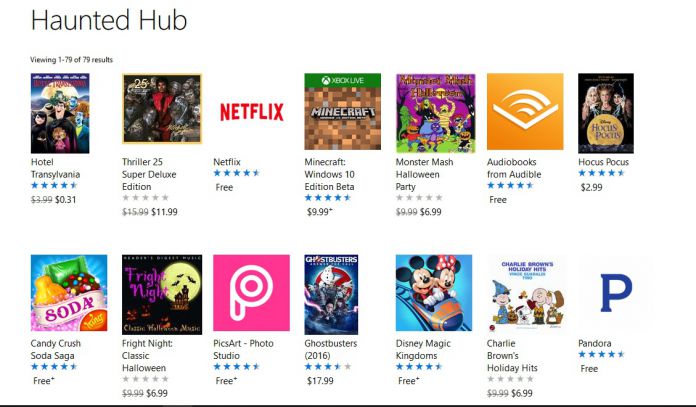 Halloween is just around the corner and Microsoft is getting in the spooky spirit of the holiday. The Windows Team has announced a new collection for the Windows Store, called the Haunted Hub. This collection is (you guessed it) Halloween themed and is a sale of sorts.

Users can get ghoulish content at discount prices and through special offers.

Covered in the Haunted Hub are games, movies, apps, and music. There are a load of goodies on offer, too much to through all of them in fact. Instead, we have picked some of the most interesting items that you can get now.

Thriller: The 25th Anniversary Super Deluxe Edition – Michael Jackson made music history when he released Thriller in 1983. The album and title song because instant classics and the latter has since become a staple of the Halloween season. Thanks to its 15-minute video, Thriller holds up today as it did way back when.

This 25th Anniversary Super Deluxe Edition comes with remixes of famous tracks, alternative versions, and behind the scenes extras. The release is now on the Windows Store for $11.99.

Minecraft: Windows 10 Edition Beta – Minecraft developer Mojang launched the Halloween-inspired Campfire Tales skin packs this week. Minecraft PE and Windows 10 Edition gamers can now get the list of new skins, each with a story behind. Included in the pack is the jealous Headless Haunter, the vengeful Lumbering Jack, the obsessive Sea-Swallowed Captain, the hasty confectioner Crisp, the cursed Well Wisher, Rancid Anne, The Sham, Ol’ Diggy and the Risen Rose.

Hotel Transylvania – Keep the kids entertained with this movie, which is available to rent in SD and HD for just $0.31. Microsoft says this deal is for a limited time only:

“Featuring the voices of Adam Sandler, Kevin James, Andy Samberg, Selena Gomez and more, Hotel Transylvania is on sale to rent for an unreal deal of just $0.31! All Simon, a monster hunter, really wants to do is fall in love with Dracula’s daughter, Mavis. But when they realize they are natural enemies, the real adventure begins. Find out what happens next – but hurry, as this steal of a deal ends Monday, Oct. 10, at 11:59 PM Pacific Time.”