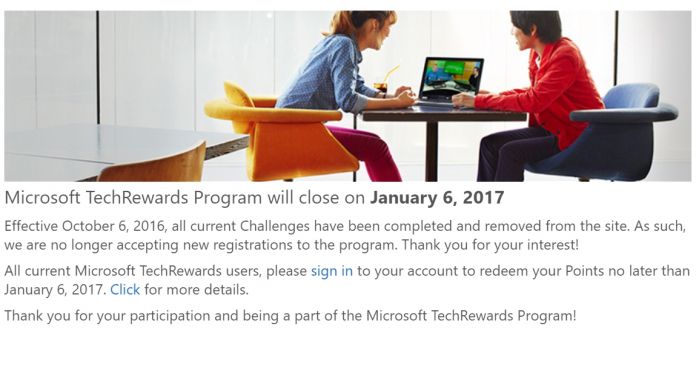 Microsoft has published a page on the TechRewards site, revealing closure on Janurary 6th, 2017. The company is already removing challenges from the site, and users can no longer earn points or XP.

These points can be spent on a variety of products, including gift cards for Newegg, Skype, Maker Shed and Xbox Music. You can also use them design tools such as Balsamiq, Advertising, Amazon Prime membership and more.

In an FAQ on the subject, Microsoft states the reason for killing the service:

“Microsoft TechRewards aimed to help Developers and IT Professionals learn, experiment, and build projects with Microsoft technologies. We believe other Microsoft Programs more closely associated with products and services can best support users in their technical journey.”

It’s a shame to see the project go, but it’s understandable that Microsoft wants to focus on its more popular platforms.

Developers are told to utilize a variety of other Microsoft services instead, including:

None of the above come close to the functionality of TechRewards, which makes us ponder the true reason for shutting down. It could be that the service just didn’t have enough support to be worthwhile.

In the past, developers have also expressed that the program encourages multiple low-quality apps over single, polished ones. Microsoft could be aware of this and be using it as a tactic to cut down on poor quality.

There has been some talk of integration into Microsoft Rewards, but that seems unlikely. The company would likely be upfront about it like with Bing Rewards.

Whatever the case, devs will want to use any remaining points as quickly as possible or risk losing them.