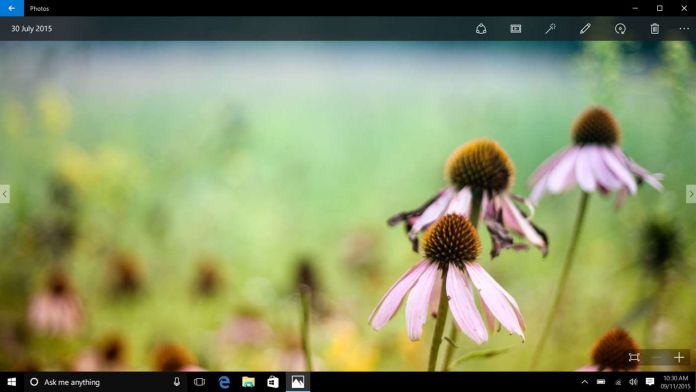 On Wednesday, Microsoft handed out an update for the native Photos app for Windows 10. As noted by WindowsCentral, the release bumps the app up to version 16.1003.10012.0. This is an update for the universal application that works across Windows 10 Mobile and Windows 10 PC. It is also worth noting that this is an Insider release.

Those on the Fast Ring of the Windows Insider Program can now get the new build of the Photos app. As a Fast Ring release, version 16.1003.10012.0 is still some way off from reaching end users. However, it gives us a glimpse of what to expect from the app in the future.

The key changes here are in UI and animations. The hamburger menu has been removed on PC and has reverted back to a more standard navigation. Users can now move between Collections, Albums, and Folders in a similar UI to the pre-hamburger menu Photos experience. Mobile devices have black header sections instead of grey after this release.

If you want some more UI customization, Photos now supplies it, albeit in a limited fashion. It is now possible to switch between Light and Dark Mode. This is more of an aesthetic thing that ties the app into Windows 10 in general. Until now Photos lacked a Light Mode, so it would contract with the system if Light Mode was engaged in Windows 10.

A much-requested change has been carried out by Microsoft. The company has tweaked the Albums menu with a cleaner layout. Photos are now arranged more efficiently and the general design just looks better.

While Photos crosses mobile and PC, it is not a full Universal Windows Platform (UWP) app just yet. Sure, it has UWP connections built in, but it has not yet been rolled out properly for Xbox and HoloLens. Gamers on the Xbox One console know that Photos is coming, though.

Back in August, we reported that the app has now appeared in the Xbox One store, but the app was listed as “coming soon”.