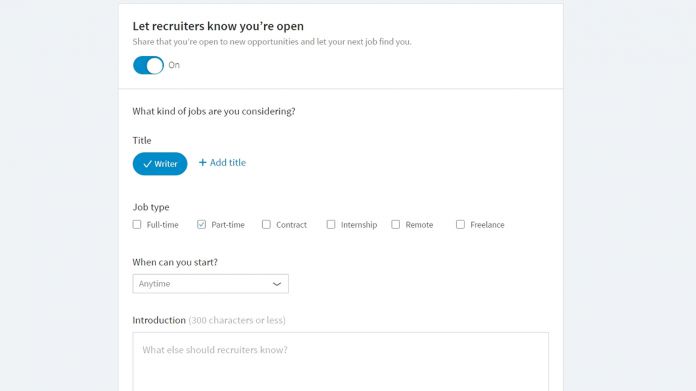 Today LinkedIn has announced the integration of its new Open Candidates feature. The update introduces a private toggle to let recruiters know that you’re open to job offers.

Open Candidates lets you select the type of jobs you’re interested in, companies and roles you like most, when you want to start and more.

According to Careers Product Leader at LinkedIn Dan Shapero, the tool fills an important niche:

“The secret to career happiness is finding a job you love, however there is no way to tell the world that you’re open to new opportunities without worrying about your employer finding out,” he says.“But imagine if you could signal to recruiters everywhere that you’d like to hear from them, and by doing so increase your chances of having one of those magic moments when a recruiter reaches out with an amazing opportunity.”

Users in Australia, Canada, the US and the UK can begin using Open Candidates now via the toggle in the preferences tab of the LinkedIn jobs homepage. The feature will be rolling out worldwide soon.

Thanks to a press conference a couple of weeks ago, we also know some of the other features in LinkedIn’s pipeline.

Chief among these is a full redesign of the web and desktop experience. The new look is more modern, clean and intuitive. Judging by the livestream footage, it’s also fast and has UI changes that will make it easier to find relevant info. According to LinkedIn Vice President Ryan Roslansky, it’s the biggest redesign since LinkedIn’s inception.

LinkedIn also gave a demo of their upcoming “Interest Feed.” The service will tap into the new mobile hashtag and content search features, but also take things one step further. Interest feed will send users personalized notifications of breaking news that’s relevant to their industry.

You can find out more about Open Candidates, as well as these other updates, on the LinkedIn blog.