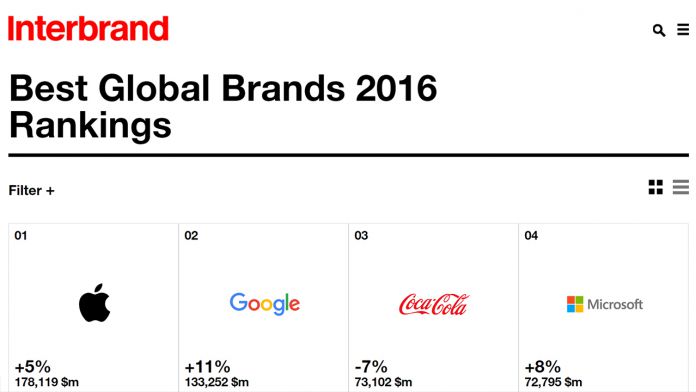 Interbrand announced its list of global brand ranks of 2016 yesterday, and Microsoft placed fourth for the second year running. The site takes into account a number of factors, including financial forecast, role of brand, and brand strength.

Role of the brand is defined as “the portion of the purchase decision attributable to the brand as opposed to other factors.” For example, a user choosing Microsoft Surface for the name rather than the features. Brand Strength is the measure of the ability to create loyalty.

As you would expect, Apple is first on the list, followed by Google and CocaCola. Toyota is fifth, followed by IBM, Samsung, and Amazon.

Perhaps more interesting than the ranking itself is the amount of growth experienced by each company. Microsoft’s brand score rose by 8% this year, less than last years 11, but still admirable given that 2015 was big release-wise.

To put things into perspective, Microsoft grew by just 3% in 2014 and 2013 and fell in 2012 and 2011. This new trend is the best growth the company has experienced in a while, and could signal further increases next year.

The growth was higher than Apple, at 5%, but less than Google at 11%. The Facebook brand grew the most, with a percentage of 48, while Amazon also experienced a large increase of 33%.

The CocaCola brand appears to be steadily declining, with a value of $73.1 million versus Microsoft’s $72.8. Though Toyota is in fifth place, the brand value sits only at $52.5 million, meaning that Microsoft could take third place next year.

Interbrand’s growth-over-time chart reveals how sudden Microsoft’s spike in growth has been since 2014. That was the year Satya Nadella took over and changed the direction of the company, which could be one factor behind the acceleration.

However, it also reveals Microsoft’s rocky history when compared to other brands. Other tech companies such as Google, Apple, and Amazon have experienced a gradual growth since 2000, while Microsoft has only just overtaken its figure from then, which was $70 million.

It’s been a fairly good couple of years for the company, and, with hope, Microsoft’s public image will continue to climb from here on out.

You can view the data for yourself on the Interbrand website.