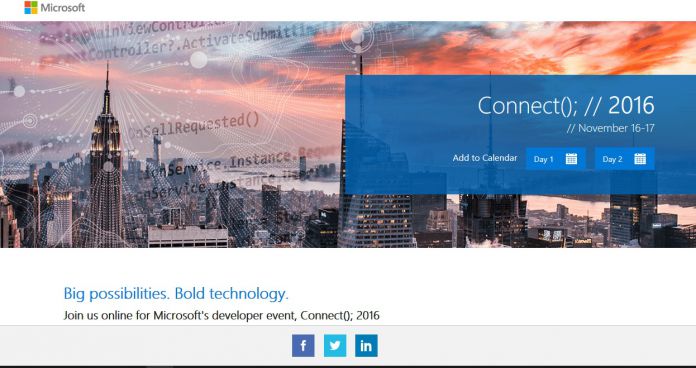 Microsoft has announced its 2016 Connect() developer event will be held in New York City. The event will take place on November 16 and 17 and is the third edition of Connect. Microsoft will stream the event live on those dates, the company has confirmed. However, attendees will be by invitation only, like in other years.

Microsoft announced the event today has created a “save the date” page. This is where you can set up a reminder so you don’t miss the live stream. Connect puts Microsoft close to its developers and shows off the technology and services they are developing:

“Developers are at the center of business transformation and the disruption of entire industries. Microsoft’s Connect(); 2016 developer event will showcase innovative technologies and solutions that represent our relentless desire to meet the needs of any developer, building any application, on any platform.”

The purpose of the event will be to give Microsoft a platform to discuss its services. Also, Redmond will be hoping to entice outside developers with initiatives that make working with Microsoft services easy. We are thinking like the Desktop Bridge for Universal Windows Platform (UWP).

However, Connect also lets the company provide tools and resources to developers. Dev’s can learn how to integrate their apps and technology into Microsoft’s services. Among the speakers at Connect 2016 will be Executive Vice President Scott Guthrie and Principal Program Manager Scott Hanselman.