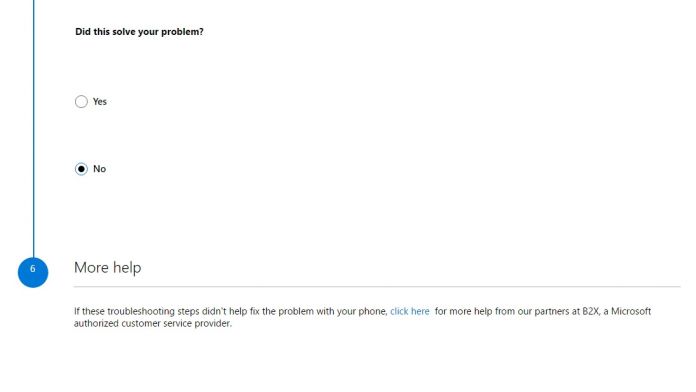 Microsoft announced that they would be ending Lumia support last Friday, but users will be glad to hear they aren’t abandoning the phones entirely. Instead, the company has partnered with B2X to give customers the help they need.

B2X is a specialized customer care service that is officially authorized by Microsoft. As you would expect, they have live chats, phone calls and will even repair devices.

Essentially, not much will change for Lumia customers other than the company they are talking to. The Microsoft support website still offers its troubleshooting service.

If the documentation isn’t enough, Microsoft now points users to the B2X site. Unfortunately, the service doesn’t seem to be very good at all. Their facebook page has 2.6 stars out of five, with eight out of thirteen reviews one star.

Users have a variety of complaints, including faulty repairs, long repair times and even reports of them keeping the phone for so long that legal action had to be taken.

It doesn’t look promising. It’s possible, however, that the company will put more effort in for Lumia devices given the partnership.

End of the Lumia

It’s clear why Microsoft is offloading the Lumia support. The company seems to have ceased production of the devices, and the 950 XL is out of stock in the UK, while the 950 has gone missing in Germany.

Furthermore, reports from a Microsoft employee suggest sales will be ending completely in December. The lack of support only makes this claim seem even more viable.

On October 28th, new Microsoft France president Vahé Torossian said the company would be pulling out of the smartphone market entirely.

“The entrance ticket to the mass market smartphone is now too high,” said Torossian, adding that Microsoft will be coming back in “a few years.”

This somewhat crushes hopes for a Surface Phone and dedicated Lumia customers may be left with poor support as Microsoft quickly turns its back on the product.