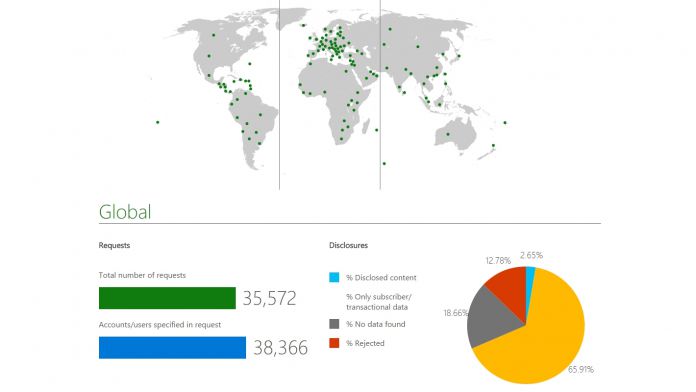 According to Microsoft transparency report, law enforcement agencies requested data from 17,500-17,999 user accounts this year. That’s significantly higher than the last report, which was between 15,500 and 15,999.

“While the number of FISA orders remained in the same band as prior periods, they covered a larger number of accounts,” said Steve Lipman, director of corporate responsibility.

Despite this, the amount of law enforcement requests has fallen, down to 35,572 from 39,084. Microsoft’s reports come bi-annually, so this data reflects the months from January to June 2016.

Only 2.65% of requests resulted in the disclosure of customer content, roughly 942 demands in total. The information includes emails, instant messages and cloud storage.

However, Microsoft also disclosed other data. 65% of the disclosures were transactional data, which could be used to track the location of users. In total, Microsoft rejected 12.78% of requests .

Interestingly, most of the data requests were made in Europe. There were also requests in Africa, the US, Australia, Hong Kong, India and more.

Though it can disclose vague numbers, Microsoft can tell individual users about requests. The company has stood strongly against this practice, and made its thoughts clear.

In April, the giant filed a lawsuit against the US government over the matter, stating:

Since them, Apple, Mozilla, and Fox News and almost eighty more have joined in. Lipman reiterated this opposal with the release of the transparency report on Thursday.

“It’s becoming routine for the U.S. government to issue orders that require email providers to keep these types of legal demands secret,” he said,“and in many cases these secrecy orders contain no fixed end date. We believe that this goes too far and we are asking the courts to address the situation.“