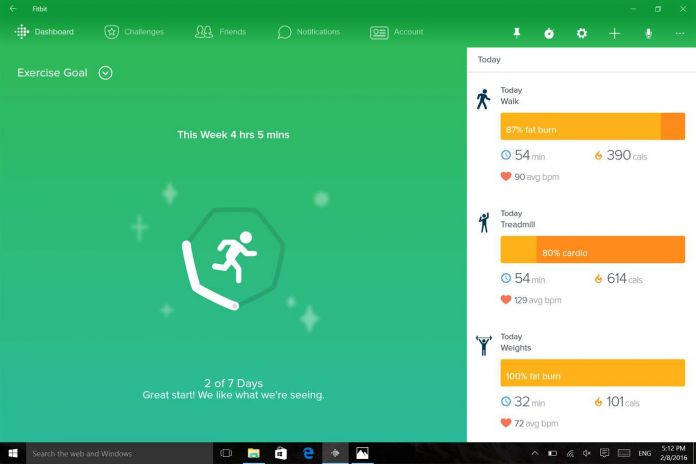 Fitbit users on Windows 10 are getting a new update today, although not many new features are on board. However, there is one pretty significant addition. The app now supports Microsoft’s HoloLens augmented reality headset.

Ok, we should address the elephant in the room. It is hard to imagine how the HoloLens will be used with the Fitbit app. Perhaps users tracking an exercise will be able to eventually access environments they can run/cycle/swim through. That would be cool, but we are not sure Fitbit will go that far into developing this app.

Of course, users will be able to get a more interactive experience by using the app through HoloLens. More than that, though, we think this is more about Microsoft’s Universal Windows Platform (UWP).

Now that developers can easily create apps across all Windows 10 devices, they may as well do it. Worth noting is the fact that a new UWP Fitbit app is also showing up on Xbox. So, we can safely assume this is the latest major addition to the UWP apps list.

The app has also scored some more general new features and tweaks. Namely the ability to set a landmark as an image. This can be selected for a background/wallpaper, or when unlocked in Adventures challenges. As is usually the case, the overall performance has also been cleaned up and bugs squashed.

Microsoft’s own fitness ambitions have taken a stumble recently. The company has decided to shutter Xbox Fitness and will be winding the service down over the next year. This has led to some controversy over what happens to the content subscribers have paid for.

Rumors have persisted over the summer than the company will not make any new Band fitness wearables. Instead, Microsoft has rebranded its Health app to be called Microsoft Band across multiple platforms.