Microsoft’s bug bounty program for Edge traditionally focused on remote code execution vulnerabilities, but on Wednesday the company widened the bounty to include other security flaws.

Users will now get up to $15,000 for spotting vulnerabilities that lead to the violation of W3C standards, as well as RCEs.

Microsoft is now looking for the following vulnerabilities: 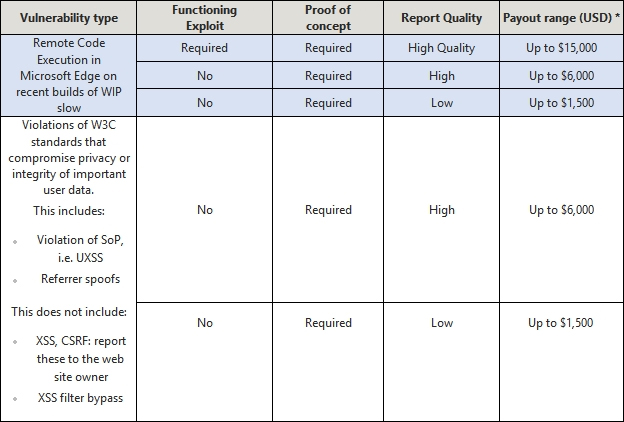 Payout varies depending on how severe the bug is.

Submitters must also adhere to the following criteria:

The only other limitation is that the bugs need to be reproducible on the latest Slow Ring Insider Preview. They also need to be emailed to [email protected] to qualify for the reward.

“Since security is a continuous effort and not a destination, we prioritize acquiring different types of vulnerabilities in different points of time,” says the company, adding that W3C exploits “compromise privacy and integrity of important user data.”

There are currently a number of other Microsoft bounty programs that are not related to Edge. The most recent applies to .NET Core and ASP.Net Core.

Eligible bugs in this program include bypasses of CSRF protection, Encoding, Data Protection failures, Information disclosures to a client, Authentication bypasses, and Remote Code Execution. This time, it applies to RTM versions, as well as beta and RC releases.

There are also programs for Office 365, Azure, Mitigation Bypass and Defense. You can read up on all of the details of the upcoming Edge bounty here.