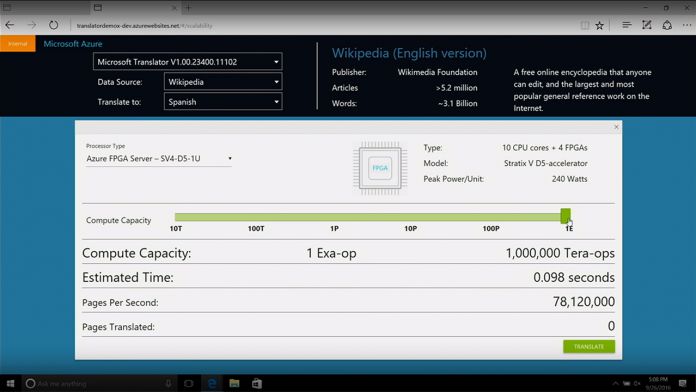 Just last month we mentioned that Microsoft’s Catapult v2 servers are perfect for AI, but the company has taken it further than anybody expected. During his closing keynote, CEO Satya Nadella revealed the first hyperscale AI supercomputer.

Of course, there’s always a healthy amount of skepticism around these claims, so Microsoft’s Doug Burger showed their potential. Tapping into the Cloud, he translated three billion words in a tenth of a second. That’s less than the speed of a blink.

“That crazy speed shows the raw power of what we’ve deployed in our intelligent cloud,” said Burger, adding that it will give Azure a strong advantage over competitors.

Central to the AI is the hardware installed in the server. FPGA chips are more flexible than their predecessors and are therefore well suited to deep learning and natural language processing. According to Microsoft, the chips have a tenfold improvement in efficiency, cost and latency compared to a CPU.

The company has quietly installed the chips in fifteen countries and five continents over the years, powering many of the Microsoft services you use today. In the future, they plan to have every project utilizing FPGA.

“What that means is you get the efficiency of hardware but you also get flexibility because you can change their functionality on the fly,” Burger said. “This new architecture that we’ve built effectively (puts) an FPGA-based AI supercomputer into our global, hyperscale cloud. We get awesome speed, scale and efficiency. It will change what’s possible for AI.”

According to Nadella, this is part of Microsoft’s goal to make AI accessible to everyone. One of the biggest dangers of artificial intelligence is that whoever holds the first hyper-intelligent AI has a huge amount of power.

To avoid this, Microsoft has established four pillars: agents, applications, services and infrastructure. The company can provide these to everyone through Azure, on a variety of frameworks.

Furthermore, customers will be able to make use of company’s architecture on a massive scale. It’s not difficult to imagine how it could revolutionize  computing. Using just four boards of the supercomputer, Microsoft can translate the whole of War and Peace in 2.6 seconds.

“It allows us to do thing on a scale that hasn’t been done before,” said Burger,“We can solve problems with AI that have never been solved before. Things that weren’t even possible a few years ago.”

It’s a service Microsoft will use to use to empower and support each of its millions of customers.

“Its never about our technology,” said Nadella.“It’s really to me about your passion, your information and what you can do with the technologies we create.”