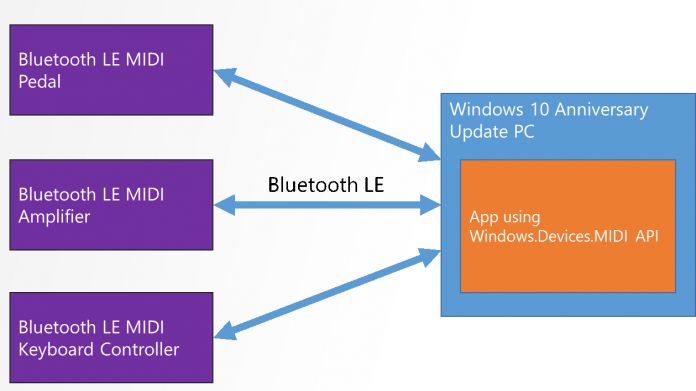 Windows has supported MIDI for a very long time. The communications protocol is one of the most important tools in music production and has been supported from as early as the 16-bit operating systems.

However, more recently Microsoft built an API for use in UWP apps. The functionality released last year, but it appears the Redmond giant isn’t happy with the turnout. In a blog post on Wednesday, the company detailed some of the newer functionalities and how developers can implement them.

The most recent Windows 10 MIDI feature was native support for Bluetooth LE, coming with the Windows 10 Anniversary Update.

This was particularly useful for the developers of Cakewalk, creators of SONAR, a popular DAW application.

“We’re happy to see Microsoft supporting the Bluetooth MIDI spec and exposing it to Windows developers through a simplified API,” said Noel Borthwick, CTO.“Using the new Win32 wrapper for the UWP MIDI API, we were able to prototype Bluetooth MIDI support very quickly. At Cakewalk we’re looking ahead to support wireless peripherals, so this is a very welcome addition from Microsoft.”

However, there have also been some other new additions, some with Windows 10’s initial release, some later. Here’s the full list:

Of course, one of Microsoft’s most recent audio improvements was support for spatial audio. Microsoft’s new technology allows for realistic sound that can emulate a real life location effectively.

Principal Program Manager of Windows Pete Brown also went into detail on how some of these can be used in Windows 10, mostly for UWP apps. It’s a great resource, so be sure to check out the full blog post if you’re interested.