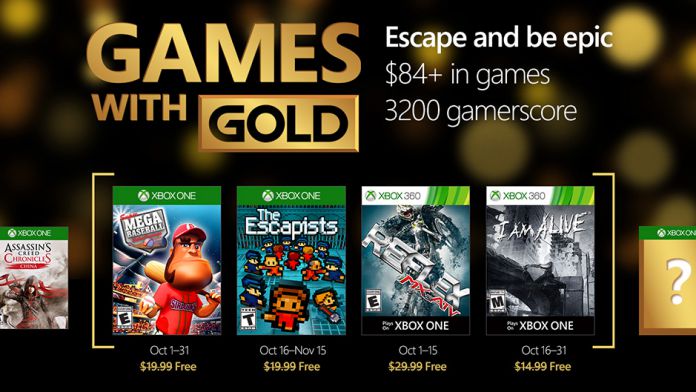 Next month will include Super Mega Baseball: Extra Innings and The Escapists for Xbox One. As usual, two Xbox 360 titles will also be available. These are MX vs ATV Reflex, and I Am Alive.

Two of the titles will begin on October 1st, and the other half will drop on October 16th. The time they’re available varies per game, so we’ve provided more detail below:

This month’s titles don’t sound particularly exciting, but there are some hidden gems in there, so here’s a quick summary.

Though its name may put some people off, Super Mega Baseball: Extra Innings is actually rated highly. The game has a score of 80 on Metacritic, though this is from just 11 reviewers.

It was also met positively by users, with a score of 7.5, and it’s easy to see why. The game has all of the detail of baseball, but presents it in a lighthearted, easy to control package.

Players can control difficulty on an individual level, which means you can play with experts or complete newbies and still have a good time. Reviewers have praised it for its sound and satisfying mechanics.

The Escapists has a slightly lower score, sitting at 74 critic rating and 7 by users. The game revolves around a prison escape, where players have to learn the schedule of guards and craft weapons before making their attempt.

You can call in favors from inmates, steal, buy and cheat. There’s sufficient depth to stay caught up for hours, but the main complaint seems to be the inherent boredom required.

You often have to wait several game days just to get one item, and though this is part of the simulation experience, it can eventually get tedious. Character models are also repeated sometimes, which can make things confusing, and music is a little repetitive too.

Unfortunately, I can’t tell you much about the Metacritic ratings of MX vs ATV Reflex, as there isn’t currently any data on the title.

However, the PC version has favorable reviews on Steam, with the “very positive” accolade. The off-road racing game doesn’t have the best graphics, but features a “Rider Reflex control system” and is considered one of the best in the series.

It has several modes, including story, arcade and multiplayer, and takes around 30 hours to complete fully. The main criticisms are a few bugs and poor optimization.

Critics found I am Alive to be a mixed bag on its release in 2012. Some have praised it as a solid survival game with good gameplay. Others, such as IGN and Xbox One’s UK magazine found it had too little depth.

The game takes place after a cataclysm, with most of the human race dead or hostile. You play a single man as you try to reunite with your family. The story is interesting, and though it has its niggles, it’s essentially free if you already have Gold.